A few weeks ago, while I was in California for the MIRROR MIRROR screening and press day, I had the incredible opportunity to sit inches away from Lily Collins, who plays Snow White in the movie, as fellow bloggers and I discussed Lily’s thoughts about life and acting. She was a delightful young woman and definitely gained 20 life-long fans that day as we sat with her.

I loved what Lily had to say about playing the role of Snow White on the big screen. 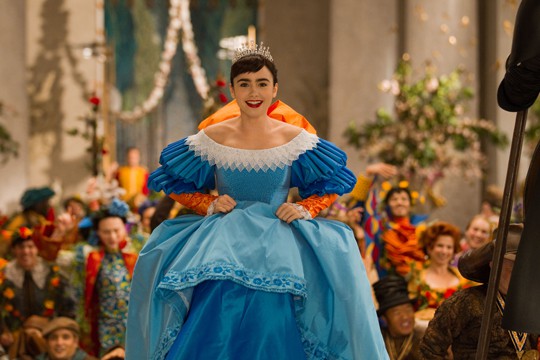 On finding out she got the role as Snow White

Blogger: So how was the experience — when you found out you were going to be Snow White?

Lily Collins: –It’s funny you ask — It comes out March 30th, which, technically a year ago, I found out that I got the movie—I found out on April 1, 2011. It’s weird to think that all this happened in a year, very bizarre.

When I found out that I got the role, I thought it was an April Fools joke, because it was on April 1st. I was in a hotel in San Francisco, I had auditioned the day before, met Tarsem that same night, flew to San Francisco to do WonderCon, and I had just got off the plane and I got the phone call. I thought to myself, “this is too fast, too weird. It’s April Fools.”

When I found out it wasn’t a joke, I screamed and I started crying and laughing at the same time. They were horrific tears, laughter, and screaming combined. I couldn’t believe it. It’s definitely bizarre seeing your face on a bus or billboard. 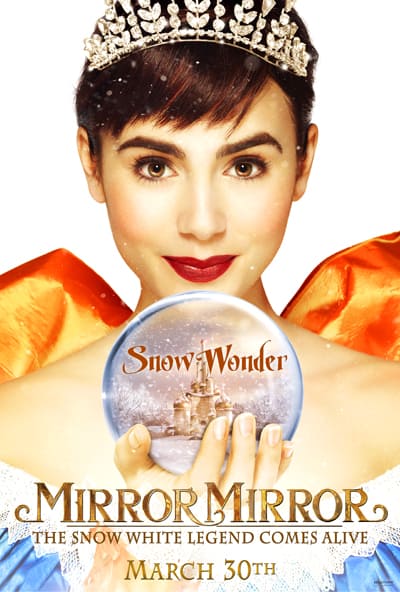 Blogger: Did you feel any intimidation about playing such a iconic role as Snow White, because those are kinda big shoes to fill?

Lily Collins: It is. I grew up in England in the countryside, and I would run around the yard kind of just making up my own fairytales in my head. And I think when it comes to fairytale characters, every young girl has their own interpretation of what a fairytale princess is and who she should be. Even if it’s the wrong hair color, it’s like, “I’m her, and that’s kind of my way of doing it.”

So, I think the script already kind of gave way to a new vision of Snow White, that she already was a modernized version of the classic fairytale character we knew. It wasn’t as much intimidation of trying to stay true to the original, it was just making sure I was someone that young girls could relate to.

I didn’t want to be this caricature of a fairytale princess that was already in cartoon form. I wanted to be someone that young girls could look at and say, “She’s a friend of mine,” you know? So, it was more trying to make sure I did relate to young girls as opposed to being fearful that I wasn’t going to live up to everyone’s expectations of what Snow White should be.

On identifying with Snow White’s character:

Blogger: When you read the script, what did you think about it? What elements do you feel really resonated with you or worked really well, because you talk about identifying with Snow White’s character.

Lily Collins: One thing that stayed the same throughout the filming was that Snow really had this amazing character arc of going from a young fairytale princess that you think you know — who’s almost void of personality. She is wide-eyed, innocent, and almost, in a sense, a caricature of a fairytale princess.

When you first hear her talking to a bird in an early scene, it’s very much that of a fairytale princess. But as you go on, Snow ends up evolving as she becomes this fighter, emotionally and physically, into a young woman who is someone that I hoped young girls would say, “That’s a friend of mine.” 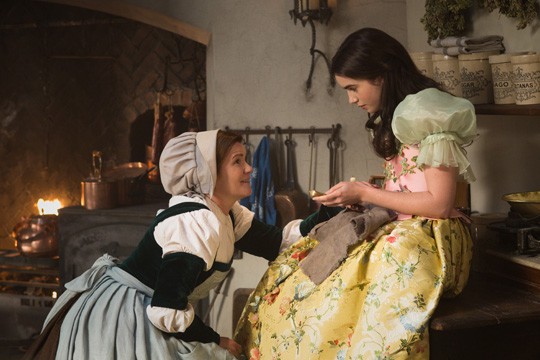 And that idea that the prince doesn’t need to save the princess in the end was there from the beginning. And I thought that was cool. Don’t get me wrong, I love all the animated versions of fairy tales. As a kid, I’d watch them over and over again. I knew every word, all the songs. I’m the kid that made my parents rewind every night.

So, seeing in that the fact the filmmakers they wanted to modernize this classic story and make it very much about female empowerment, but not overwhelmingly so, It’s just the fact that she found it within herself, that she had the potential to do what the prince could do.

And that sense of female empowerment and confidence and self-esteem is something that I have always been a big advocate of promoting in young girls, and teen confidence among girls and boys but especially with young girls, and body image. And the story is the fairest of them all. And the price and the queen talk about her beauty, or the queen’s lack of beauty, or we agree to disagree kind of thing.

But, Snow is never aware of her own beauty. She isn’t looking in a mirror and saying, “I can make this happen because I’m pretty.” She learns from the dwarves about self-confidence. And once you accept yourself and accept spontaneity in the world, you can then pursue things because you’re more aware of your surroundings and more confident within yourself.

So, I think the fact that she is so unaware of how she looks, but she finds it within herself to love herself regardless, that’s the core of self-esteem and confidence building for young girls. So, I saw that the script had potential. I thought, “I would love to be a part of something that gives a message like that to young girls.”

On finding her place in the world:

Lily Collins: I feel that before we even really sat down, saying that it became this life experience for me. This is the biggest film that I’ve done to date. It was the most I’d worked and trained and the most into a project I have immersed myself.

And I walked into it wide-eyed, not sure what was going to happen, nervous, excited, just very kind of unaware. And that’s how she is at the beginning of the story. And throughout the process, I was sword fight training and fencing. And I was there on my own in an apartment, kind of making my way around and finding my place in Montreal, and being pushed and lack of sleep and just really learning how I cope in situations, and fighting to make the scenes the best that they could be, and proving myself to everybody and to myself.

And I truly felt that when I left there, I left this new young woman who felt like she had just accomplished something that singing a Bollywood number, sword fighting in these costumes, I never thought I’d be doing that. And the fact that people believed in me enough, like the dwarves believed in Snow, just push yourself, you have nothing to lose.

And that kind of really taught me a lot along the way. 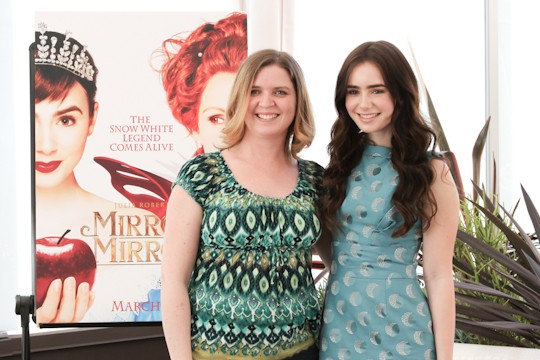 What would you love to ask Lily about playing Snow White?

Note: Photos and press day experience courtesy of Relativity media (except for the last photo of Lily and Lolli).