Dakota Goyo Could Write This Column:  How to Impress a Roundtable of Moms 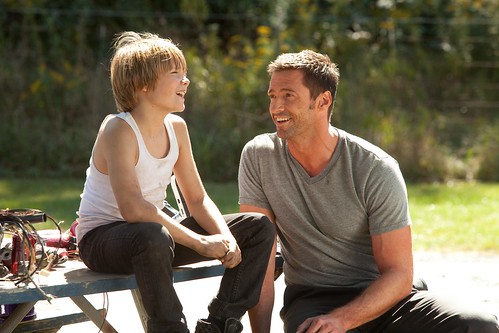 Dreamworks’ Real Steel hit #1 at the box office last week which is big news for one of the movie’s biggest stars, 12-year-old Dakota Goyo.

In Real Steel, Dakota plays 11-year-old “Max,” who just lost his mother and is unhappily reunited with his deadbeat dad, a robot boxing promoter named, “Charlie,” played by Hugh Jackman. The only thing in the world the two have in common is their interest in robot boxing and Dakota steals the show with his wit, little boy charm and smooth dance moves. (You can see the full review of Real Steel here with giveaway.)

Before Real Steel, Dakota played alongside Samuel L. Jackson in Resurrecting the Champ (another boxing movie), Woody Harrelson in Defendor and Anthony Hopkins in Thor, so Dakota’s resume is already pretty impressive.

Last week, it was just like any other afternoon for Dakota; he got home from school and happily hopped on a conference call with a bunch of us mom bloggers so we could interview him.  He was gracious and awesome and incredibly insightful for a 12 year old boy as he talked about dancing, working with robots and above all, staying grounded with his friends and family. (I couldn’t help but sit there thinking, if my sons — now 5 & 3 — speak this insightfully and respectfully at 12 years old, I will have done it right.) 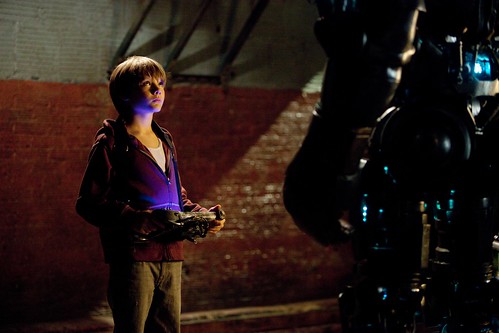 What was the coolest thing you got to do in the movie?

“To work with the robots, Ive always loved robots, ever since I was a kid, they’re just so cool and exciting, getting to see 9 foot tall functional robots. It’s just a kids dream.”

Getting the part was actually hard work for a 12-year-old who had to audition four times before getting the part. But when he got it,  Dakota worked 9 1/2 hour days for 72 days. That’s hard work! (And yes, he kept track.)

So what drew him to the part of Max?

“Definitely the robots, I mean real 9 foot tall robots that are functional are a kids dream and also meeting — not Wolverine, but the guy, Hugh Jackman, the nicest guy in the universe, just getting to meet him was unbelieveable.”

During the filming though, he still got time off to be a kid. Although he didn’t get to hang out with his friends back home, he met a friend he was able to hang out with while he was filming so it wasn’t all robots and boxing.

“We could ride our skateboards and our scooters, since we’re boys and you have to have fun.”

But with such a successful career already at age 12, how do his family and friends keep him  grounded?

“They give me a lot of support but what I really like is they keep me grounded obviously by living in my home town and not moving to LA. And staying with my friends, they don’t always tell me, ‘Oh my gosh, you’re so good,’ and I appreciate that because I don’t want to  be like, ‘Oh my gosh I’m at the top.”  He continued, “When people keep on telling me, ‘You should be better, you gotta fix this,’ it’s always something that I have to work for.”

Dakota made his dancing debut in Real Steel, but he had help coming up with the dance moves.

“I never tried to dance before the film so I never really knew I could dance, and then our choreographer Ann Fletcher, she kind of taught me the moves I never knew that I could do,” he said. “We had like 20 minutes a day for 3 days to learn a two minute routine, so it wasn’t a very long time, it sounds like a long time but it was only like an hour to learn a 2 minute routine, getting to learn those moves from Ann, I mean, I’ve been doing those moves and Ive been dancing ever since.”

Real Steel is rated PG-13 and is out in theaters right now. Go see it!