5M4M Contributor Christie O. goes behind the scenes with Dreamworks Co-Chairman & CEO Stacey Snider who opens up about “The Help” 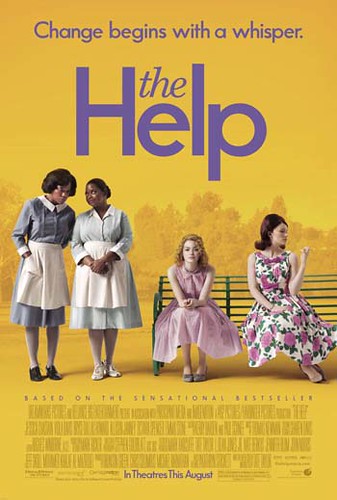 The amazing movie The Help hits theaters TODAY (August 10, 2011). I’ve reviewed the movie over at 5 Minutes for Books (the post includes a giveaway), but here I’ll give you a preview:

I also laughed my tuckus off. It was simultaneously meaningful, hilarious and tearjerky (without giving too much more than that away, I should stop there.)

The reason I mention I cried, actually, is not because of the content of the movie itself, but instead because I knew that sometime after we screened the movie we would meet with the Co-Chairman and CEO of Dreamworks, Stacey Snider. She is partners with Steven Spielberg.

For some reason, the emotion of the movie caught up with me in the credits and when the movie was over and all of the realizations of its depth sunk in, I bawled like a baby. I mean, sobbed. There I was in the front row with my last teeny tiny flimsy excuse for a tissue left with tears streaming down my face, a Rudolph nose and my makeup all wiped off. The last time this happened was when I watched Ghost in my living room sometime in the early 90s (before I even wore makeup) when I cried into my parents’ plaid sofa pillow. It was bad.

But no problem, I would clean myself up before we met her. (Right?)

WRONG! Immediately following the movie, she came walking down the theater’s aisle toward the front of the theater and the interview began while I remained a sweet hot mess.

It turned out that was ok though. We were all girls there and during the interview, she got teary-eyed too.
When I tell you this is a powerful, moving movie, I mean it. It evokes emotion just to talk about it. 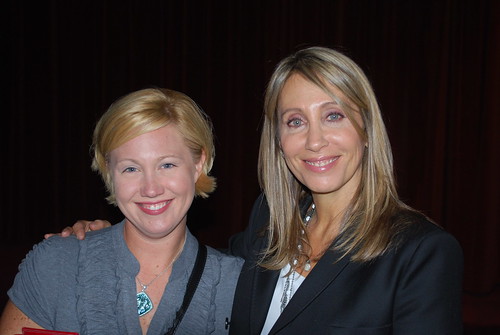 Here is our (sometimes tearful) interview with Stacey Snider:

How did you choose “The Help”?

I called the author, you know, Kathryn Stockett, and she had given the rights to Tate. Her childhood friend from Jackson, Tate Taylor, who wrote the adaptation and directed it grew up with Kathryn in Jackson, Mississippi and it’s a kind of great story because they were best friends growing up both raised by single moms, both raised by African American women who were like their moms and both trying to make it in their respective careers.

On having a first-timer make the movie

She was rejected by 60 publishers, 6-0, and she finally got it published and gave him the film rights which, you know, when I read the book I said, ‘Why don’t you give us the film rights and you can watch how we make the movie and you’ll learn and it’ll be a great apprenticeship, you know, experience for you?’ And he said no and I said well, you know, it’s really hard to justify giving the amount of money that it will take to do a good job with this movie to a first time director but, you know, call me if you don’t get it set up. And by the time he called me he had written the script which was beautiful and it proved more than just that he had ambition. It proved that he actually had talent. Still doesn’t tell you if he can direct a movie but when you read a script that was as emotional and respectful as it was, it was a good sign.

You know, it was a great story of their loyalty to each other and I think, you know, from our standpoint it was a leap of faith but we have had good success working with first time directors. It’s scarier than when you’re working with someone with a track record but everybody’s gotta start somewhere.

What has been the reaction to “The Help” from the African American communities?

We showed it to Ambassador Young; Had a big screening in Atlanta and what was interesting is that he called out not African American women but he called out African American men and he said, ‘I want every black man to see this movie to honor their mothers,’ — this makes me cry, ‘their aunts and their grandmothers’ and everything because people — it’s only a generation away.

As a working mother of two daughters

I relied on women to help me raise the kids and I’m a pretty good hands-on get-home, get-your-butt-home-mom. But I’ve always felt like more love is good. More people that know them, that love them, you know, I know women who feel threatened by that. I feel like Jody, who’s the woman who’s been with us for 12 years, that Jody and my husband and I have raised the girls together.

What are your plans for Oscar night?

Well I’m too superstitious to even say anything about it but I do hope that the movie gets recognized that way.

Stacey Snider is an amazing, professional and down to earth executive and mom, it was such a pleasure meeting her, even with a red nose and swollen eyes! Go see The Help! It was released today – Wednesday, August 10 – so you don’t have to wait any longer!

Other posts about The Help

Check out my official review of The Help (and giveaway) over at 5 Minutes for Books.

At Christie’s blog, Average Moms Wear Capes: The Story Behind “The Help”