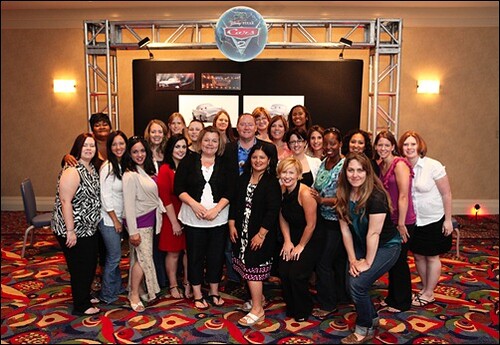 Getting to talk to Pixar’s Chief Creative Director and two-time Academy Award Winner John Lasseter was like getting to peer right into the CARS 2 driver’s side window.

Because for starters, John Lasseter has five boys. Five. Ranging in age from 10 to 29.

And I thought having two boys was rough. (In a good way, of course. YouknowwhatImean.)

But in this roundtable discussion with John Lasseter, we learned quite a bit about the mechanics of CARS 2, along with all of his major influencers (which include his family). It was quite eye-opening. (You can check out our Cars 2 review here.) 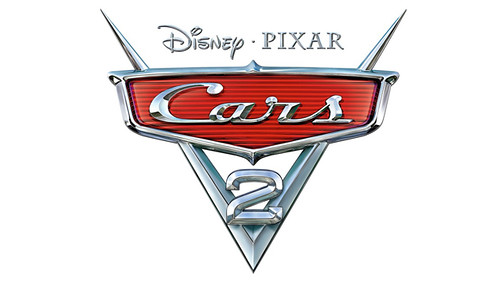 The plot for CARS 2 was hatched well before it came out on paper, in fact it’s been on John Lasseter’s mind since the first Cars installation. Do you remember the scene where Lightning and Sally go cruising down the strip after they turn the neon on for the first time? That scene was originally a “first date” scene where Sally and Lightning go to the drive-in and the movie playing on the big-screen was going to be a spy movie.

Unfortunately, that scene got cut but the idea, along with Lasseter’s love for spy movies, stuck with him through the years. “We only do a sequel at Pixar if we come up with a good idea. I thought it’d be really fun to dig up that spy movie idea,” said Lasseter.

And it just fit. “My 5 sons and I were really into, like, the Bourne Identity movies. We thought, this is a great genre to do in this, with Cars, because one of the things about spy movies is they had cool spy cars,” said Lasseter. And cool spy gadgets, too! 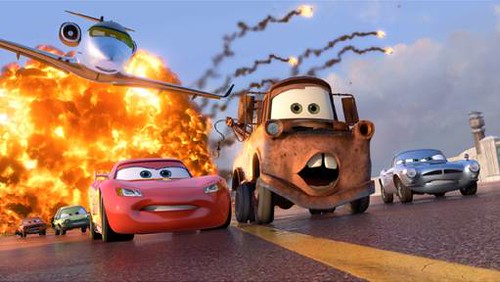 But Lasseter did not just want to reconstruct Cars for a CARS 2 sequel, he wanted to give it a complete detailing and makeover. “As we approach all of our sequels, we want to take a look at the main character. What can he learn that’s different than the original? We can’t have amnesia and have to relearn the same thing all over again,” he said. 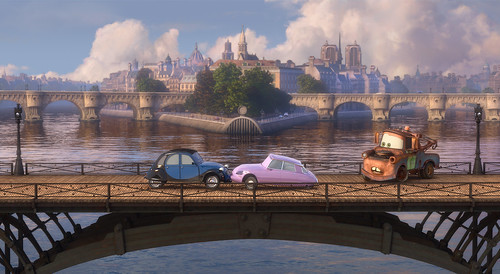 So Lasseter drew from his original spy idea and his travels around the globe to countries that have these sort of “car cultures,” like Italy, Germany and the U.K., while promoting the first Cars installation. He also drew inspiration from his favorite Alfred Hitchcock films, The Man Who Knew Too Much and North by Northwest, and the idea of an innocent person getting caught up in a conspiracy. “I thought it would be really fun to take our characters to these places so kind of those ideas and the spy movies, travel around the world in these glamorous places, and I thought this is going to be really fun. And it satisfied me for wanting to do something that was really different from the original movie,” said Lasseter, who was, by the way, sporting his signature Hawaiin shirt adorned with CARS 2 characters.

Just in case you were wondering. 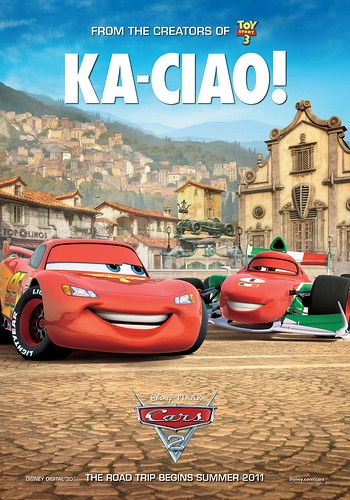 Now that the body of CARS 2 was laid out, Lasseter and his team of artists and designers worked hard to build amazing features within the film. “The detailing in cars 2 is unlike any movie we’ve made,” says Lasseter.

And it truly is. 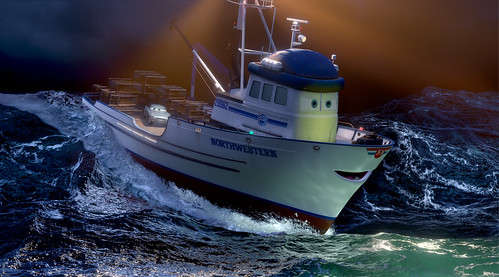 From the detail of the waves of the ocean (they look so real!) to the international landmarks that they researched and “car-ified” (like transforming Big Ben into “Big Bently”), Pixar animators worked with car companies to get the right looks for the cars they portrayed and took trips to all of these destinations to note the color palettes and the atmosphere of each country to get the scenery just right. 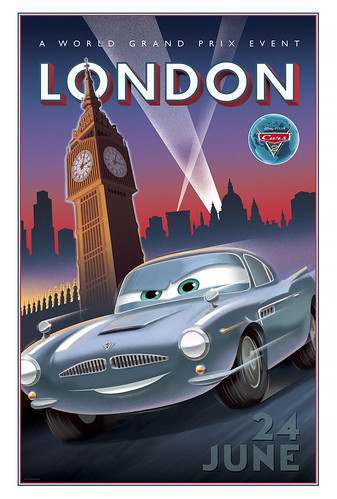 They even made personal touches within the movie, like naming one of the tire companies advertised, “Lassetyre.” “My wife always said, ‘Don’t make the movie for the first time someone sees it, make it for the 100th time a parent has to suffer through it,” said Lasseter, which of course garnished a couple of laughs around the room, especially from this mom who has seen Cars about 100 times. At least. I am still noticing things in the first Cars movie I hadn’t noticed before.

On Drinking and Violence

One of the hotbutton topics we approached as moms with John Lasseter was the use of violence and the appearance of drinking within the film. It was a discussion he, as a filmmaker but above all, a father, was very serious about and did not take lightly, which a mom can sure appreciate. “I just want to be really clear with you, I’m very conscious about alcohol in the films, and it seems like theres a lot of drinking, it’s all oil.” Lasseter explained. “They don’t drink alcohol and drive.” In fact, as much as possible, he said they label everything as oil. “It’s something that’s really important for me as well,” he said.

But what about the violence? If you’ve seen the first Cars movie, it’s hard not to notice that the level of violence went from zero-to-60 from the last Cars film to CARS 2. So of course, we had to ask about that too.

“The Incredibles and Cars are both a certain kind of genre that naturally has a certain level of violence that comes in there and to me, I’m very conscious of the violence in there,” Lasseter told us.

“There’s a certain level that is accepted for the kind of genre that they’re watching, superheroes, or kind of
spy movies; and then there’s stuff when it starts being kind of cruel and we draw the line there. We don’t want to do that, even with automobiles,” Lasseter explains. “It’s one of those things that we were very conscious of, that line, and it was really important because I knew I was stepping into a genre that had guns and explosions and stuff like that but I wanted it to be ok for kids and for families.”

Lasseter continued, “I just look at it from a ‘father’ point of view and I think that’s what’s so good about Pixar is that we’re all family. We are all family people at Pixar; and that we all love movies ourselves and I am devoted to making movies that you, all of you, enjoy just as much as your kids and you walk out feeling like it’s ok.”

I have to admit that meeting John Lasseter, the Academy Award Winner, was intimidating in theory. But it was immediately comfortable talking to him about the movie. He was just a down-to-earth, funny family-guy with an obvious passion for movies.

It would be accurate to say that John Lasseter grew up with Disney himself. With dreams of being a Disney animator, he started out as a sweeper at Disneyland in 1977 and went on to be a ride operator for the Jungle Cruise. Now his son is working at Disneyland, too. It’s truly the stuff dreams are made of.

Plans for more Cars adventures include “Cars Land” opening up at Disney’s California Adventure next year in which Cars-lovers will be transported to Radiator Springs, a project that Lasseter is excited about.

But he is saying that we’ll all get to meet a great new Pixar character next year, and she is a SHE, Pixar’s first lead female character! “My wife is very, very strong about having strong female characters and we have amazingly strong women at Pixar, and we’re very excited about having the first female lead with “Brave.” (You can catch the trailer for “Brave” here.)
Coming soon to a theater near you!

Don’t forget to read our review of CARS 2 and enter the giveaway!

ShareTweetPinPocketMail
What is your favorite moment of JOY you have captured of your kids?
A Small Battery Emergency at Type A Parent Conference…