My daughter loves to learn about outer space. I sometimes catch her watching the NASA channel, completely engrossed. She has dreams of becoming an astronaut someday. I know that she would LOVE for me to take her to Hubble 3D at our nearby IMAX. In fact, I think I will have to. It will be quite the treat for her. 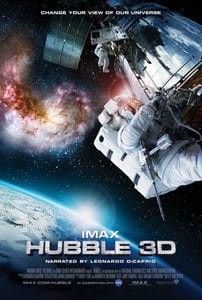 Through the power of IMAX® 3D, Hubble 3D, which opens on August 20th, will enable movie-goers to journey through distant galaxies to explore the grandeur and mysteries of our celestial surroundings, and accompany space-walking astronauts as they attempt the most difficult and important tasks in NASA’s history. The film will offer an inspiring and unique look into the Hubble Space Telescope’s legacy and highlight its profound impact on the way we view the universe and ourselves.

To celebrate the wide release of Hubble 3D, we have an ‘Astronomical’ IMAX Prize Pack to award one lucky reader.

To enter, please leave a comment below. To make it fun, feel free to finish this sentence in your comment – “If I were an astronaut, I would be most excited about ____________.”

This giveaway is open to US residents only and ends on Friday, August 20th. We will announce our winner on Saturday, August 21st. For our complete giveaway rules, please see our site’s terms and conditions of use.