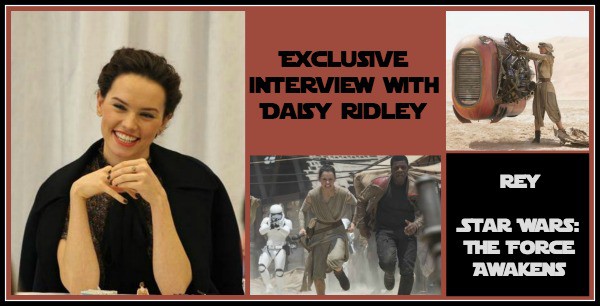 Millions of people have seen her fresh face plastered everywhere, yet she is an unknown actress. Star Wars: The Force Awakens will be Daisy Ridley’s first movie role. She stars in the film as Rey, a scavenger on the desert planet of Jakku. 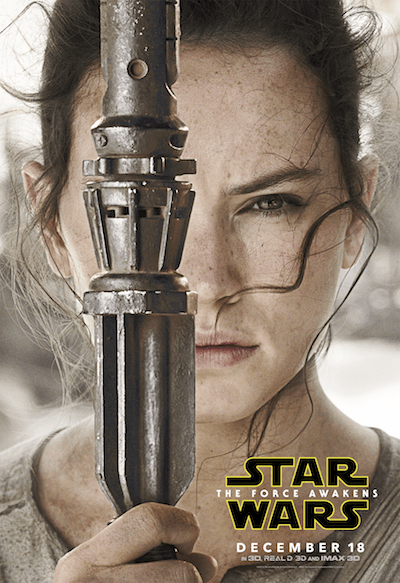 Kathleen Kennedy, Producer of Star Wars: The Force Awakens, has said that girls will finally have their “Luke Skywalker” with Daisy’s character Rey. When asked how Daisy felt about this comparison she said that while filming she didn’t think of herself in those terms because it would have been overwhelming. However, she can see a little bit of each original character in Rey. She is a “kick ass pilot” like Han Solo, a “kick ass girl” like Leia and she comes from humble beginnings like Luke.

Daisy shared with us that her favorite movie is Matilda and while Rey’s story and Matilda are different, their characters find themselves in similar circumstances. They both are in a place that isn’t fulfilling, not emotionally giving them what they need and they are not being appreciated. Both characters go on a journey of self discovery, they push their limits and meet people who bring out the best in them.

When Daisy saw the trailer for the first time she explains that she was overwhelmed because she finally was able to see what she was a part of.  However, after watching the film she didn’t feel this way, she enjoyed the film but felt uneasy watching herself in the movie. She confided in Harrison Ford about her feelings and he confessed that he doesn’t like to watch himself in movies either.

It wasn’t until she was on her way to the airport that she had an overwhelming wave of emotions and cried in the car. Daisy explains that the emotion she felt after watching the film was so much more than what she felt when watching the trailer.

She feels so blessed to be part of it and has a hard time accepting that she is going to be part of something that people will enjoy so much. It’s been hard to accept that all of this is happening.

According to Daisy, her audition process was very long and at first she thought that she wasn’t going to get the role. She had never been so nervous for any audition before and showed up an hour early. She was told to leave and come back later. She went to a coffee shop to try and relax but still showed up a 1/2 hour early. 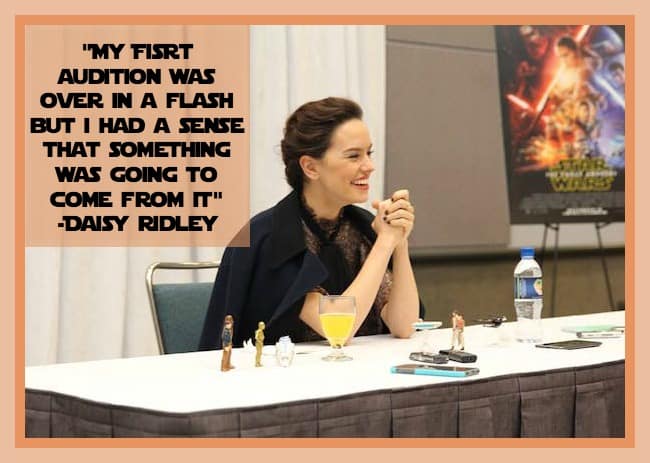 During the whole process she always had it in her mind that something was going to come from her audition and that feeling kept pushing her forward. During additional auditions she was putting a lot of pressure on herself and she felt like she was messing up.

On her last audition she felt like she did a good job and was pleased. Even if she didn’t get the role she was happy with her performance. Luckily, J.J. Abrams saw something in her and she was cast as Rey.

Daisy was cast in the film before John Boyega (Finn) but she couldn’t tell him during the casting process, and she even tested with him. In fact, Daisy knew all of the people that J. J. wanted in the movie and they were all cast.

There are characteristics of Rey that Daisy sees in herself.  She is brave but Rey is far braver, and Daisy always tries to do the right like Rey does. Daisy also hates lying and Rey is honest and open and it scares her, it makes her feel like she wants to run.

Daisy has been very lucky in my life to be surrounded by incredible women. She has a close relationship with her mom and grandmother.  Daisy also looks up to Kathleen Kennedy and other women who are older, wiser and have far more life experience. In her own way, Rey has lived a life, she has wisdom beyond her years. 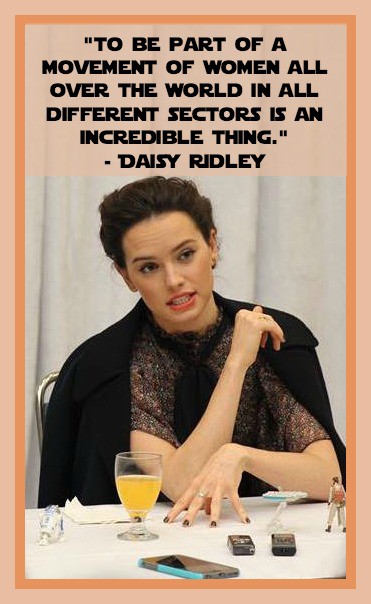 Sometimes girls can’t follow a story if they are unable to find something that represents themselves in a film. The thought of girls being able to relate to her character in Star Wars is incredible. Daisy knows that she’s not changing the world, but to be part of something that is perhaps groundbreaking and to be part of a movement of women all over the world in all different sectors is an incredible thing.

Daisy went to a Performing Arts school and was in the Musical Theater Chorus, she loves to sing. She would like to continue taking voice lessons and wishes she sounded the way she could if she had time to train. She would love to be in a musical someday.

When asked what color her Lightsaber would be in real life, she answered that it would be like a Disco Ball and it wouldn’t do any harm, it would just help to get the party started.

I have never been part of a blogging event where the actress was unknown. Sitting down with Daisy Ridley was a treat, she was a joy of light in the room and it will be fantastic to watch her career soar. 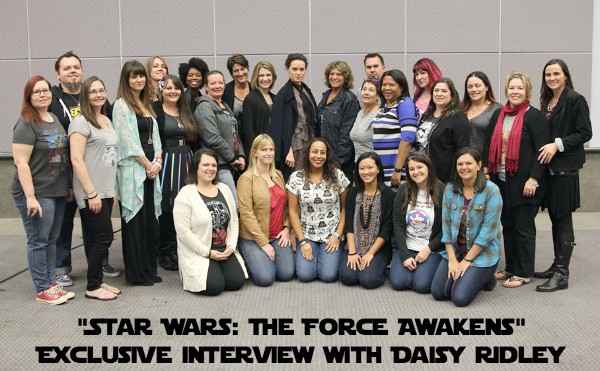 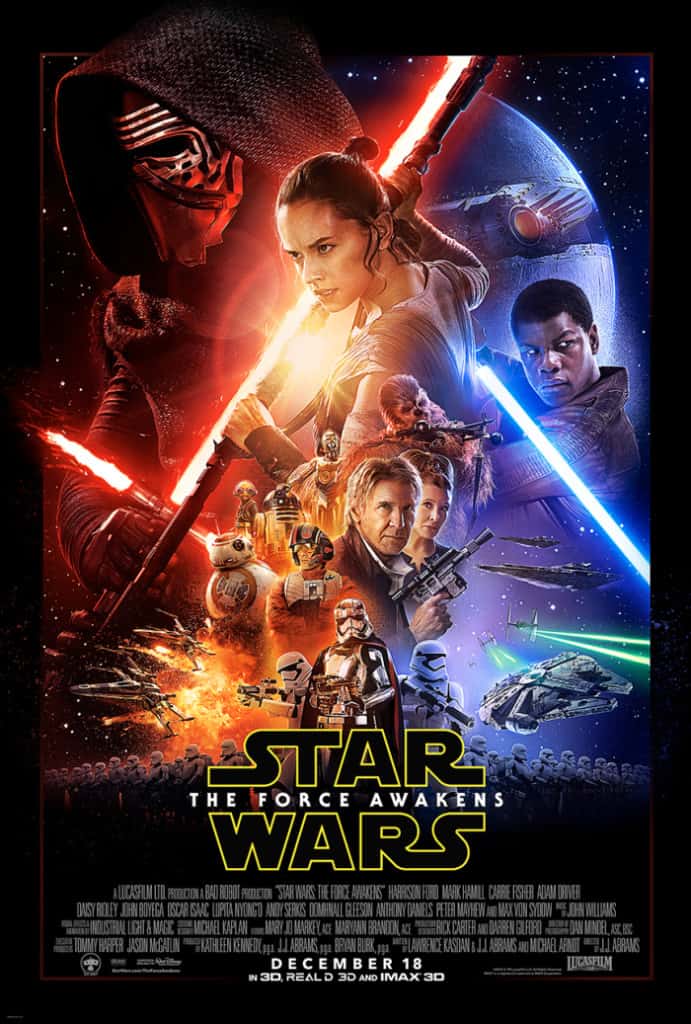 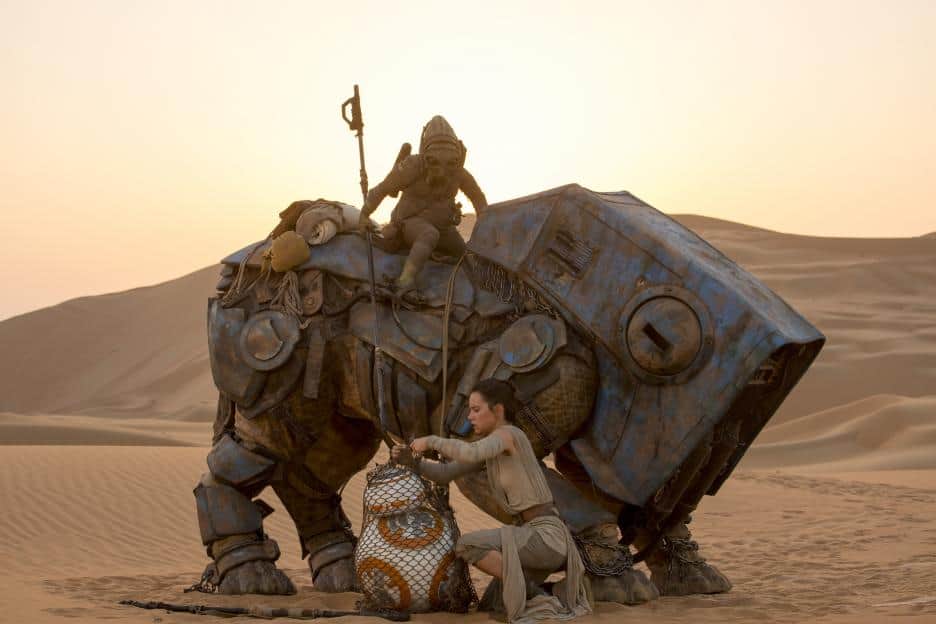