Nancy, book lover and 5 Minutes for Books regular contributor, experienced a true “fan-girl” moment and is here to share it with you.

Have you ever wondered what it’s like to attend the signing of an author you admire? When I saw that a local bookstore won a signing by Neil Gaiman, I debated if I should go. I knew I’d have to get there early, be prepared with food and entertainment, and wait in a potentially long line. But I figured that unemployment has its advantages, so I pre-ordered his new book, Trigger Warning: Short Fictions and Disturbances, and ensured my place in line. 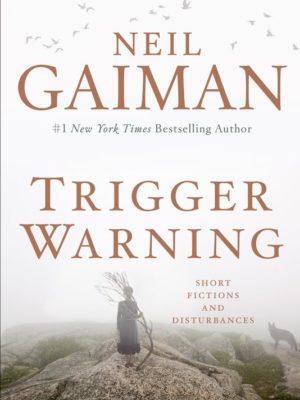 I don’t remember how I first heard of Neil Gaiman. The first book of his I read was American Gods, back in 2002. And I kind of hated it. But as Gaiman fans know, American Gods is a pretty polarizing book, and I decided to give him another shot. So a year later, I read Good Omens, co-written by Terry Pratchett, and had a much better outcome. And the rest, as they say, is history.

I’ve read almost everything he’s written, from the books for kids — The Dangerous Alphabet, Fortunately the Milk — to the YA books — Coraline, The Graveyard Book — to the adult fantasy books — Neverwhere, Stardust.  I even tried to read Sandman but graphic novels aren’t my thing.

I arrived at Old Firehouse Books a little after 1pm, picked up my pre-ordered copy of Trigger Warning and secured my receipt as it was my ticket in, and headed past the approximately 80 people ahead of me to the end of the line. Not so bad. Even better, at the end of the line was a bench. Score, since I forgot to bring my camping chair.

I immediately struck up a conversation with my neighbor just ahead of me in line, she was saving a spot for her husband and 2 kids. She had a Doctor Who tee shirt (Gaiman has penned a handful of Doctor Who episodes, and Trigger Warning includes a Doctor Who story) and stacks of books to be signed. Behind me in line was a twentysomething working on an amazing drawing with colored pencils; she absentmindedly hummed to herself a lot. Next were two other women, both alone. We had never met before, but were now line buddies. We watched each other’s stuff when we needed to go to the bathroom, get something to drink, or just go for a walk.

The line quickly grew, and it wasn’t long before it snaked down the alley, turned left, then turned left again. There were a lot of people. Many had books; most who did had Neil’s new book. Some were in character — I saw at least one Coraline. A police officer soon appeared and we joked about the riot that us book people were going to cause.

Folks from the local library passed out flyers to promote a contest and book store employees handed out a trivia sheet with the signing’s rules on the other side. The rules were pretty simple – buy a copy of Trigger Warning to get in, bring up to 3 of your own books from home, and Neil will sign any books purchased at the event. A photographer from the local newspaper wandered around, taking pictures of two of my line buddies. 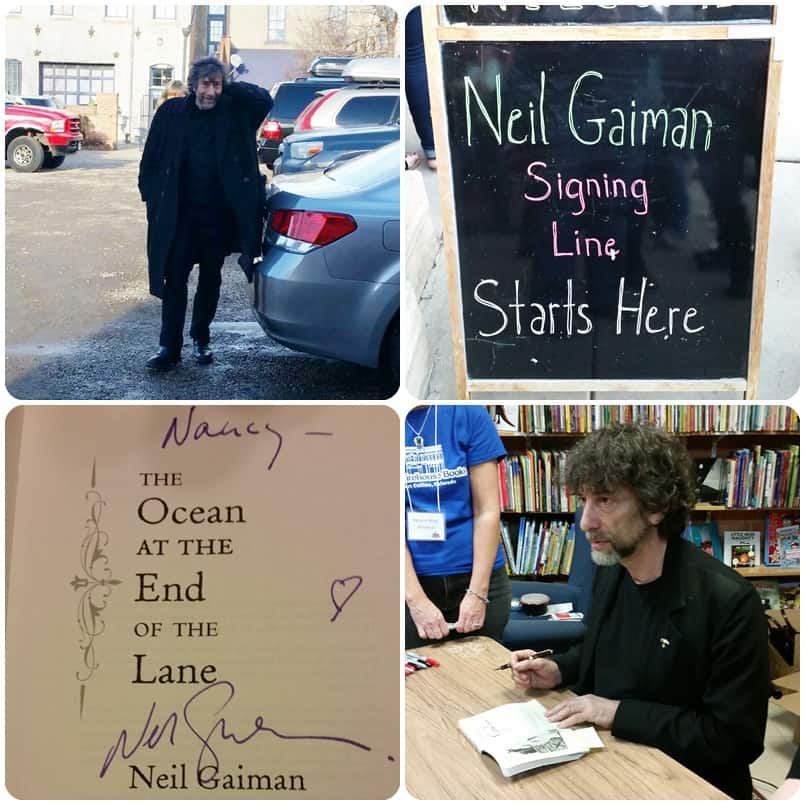 Around 3:45, a black SUV drove down the alley, and cheers went up – Neil had arrived. My line buddies and I screamed, then joked that we were like crazy fangirls. He walked right past us, to cheers and applause. Shortly after that the line began to move. Slowly but surely we made our way into the store, through the stacks, to the table where Neil was signing. Along the way were tables with his books, including one with several issues of the Sandman graphic novel and a very informed volunteer who gave his opinion on the appropriateness of Sandman for 11 year olds (his verdict? It depends on the 11 year old). There were also volunteers helping to make the signings go fast – sticky notes with names, books opened to the signing page and nestled inside each other.

Finally, we made it to Neil.  We were told only one book could be personalized due to the number of people, I chose The Ocean at the End of the Lane (linked to my review) as it’s my very favorite of his books. They also changed it to 3 books total, to help move things along. Everyone around me was understanding and willing to comply with the changes. My line buddies and I agreed to take pictures of each other with Neil, but that ended up being unnecessary as there was a photographer present.

At last, my turn.  I handed him my two books, smiled for the photographer while Neil signed, and then was struck mute by shyness. But he looked right at me and said, “Thanks for coming.” I said, “I wouldn’t miss it!” And he said, “Neither. Would. I.”  Just like that – pauses between each word, like he really meant it.

It was 6:30pm. I’d been in line since 1ish.  Was 5.5 hours worth it to meet an author I love? I think so. I would have regretted it had I not gone, and I’m glad I got there early so most of my waiting was sitting on a bench while the sun was still up. I’ll never see my line buddies again – we didn’t even say good bye, let alone exchange information. But I’ll always remember the artist, the Doctor Who fan, the mom of grown children.

I found out later that Neil was signing from just before 4pm until after 3am, over 11 hours. The number of fans is estimated to be over 2,000. If I didn’t already admire him before, I definitely would now.

Be sure to check out 5 Minutes for Books for my review of Trigger Warning.