Jennifer D, 5 Minutes for Books editor, had the opportunity to talk to some of the creative team behind the new Disney Press series for young adults.

I love books and stories, and hearing about this superhero story with comic book elements in a long-form novel was so interesting to me. Here are the people behind this story and what they have to say about how Stan Lee’s concept, the art, and the text all came together:

About the Creative Team:

Stan Lee is known to millions as the man whose Super Heroes propelled Marvel to its preeminent position in the comic book industry. His co-creations include Spider-Man, The Avengers, Iron Man, The Incredible Hulk, The Fantastic Four, as well as hundreds of others. He introduced Spider-Man as a syndicated newspaper strip that became the most successful of all syndicated adventure strips and has appeared in more than 500 newspapers worldwide. Stan currently remains Chairman Emeritus of Marvel, as well as a member of the Editorial Board of Marvel Comics. He is also the Chairman & Chief Creative officer of POW! Entertainment, a multimedia entertainment company based in Beverly Hills, CA.

Stuart Moore has been a writer, a book editor, and an award-winning comics editor. His recent writing includes Civil War, the first in a new line of prose novels from Marvel Comics, The Art of Iron Man 3 (Marvel, with Marie Javins); and THE 99, a multicultural super hero comic from Teshkeel.

Andie Tong has worked on titles for various franchises, including Tron: Betrayal, Spectacular Spider-Man UK, The Batman Strikes, Smallville, Wheel of Time, TMNT, Masters of the Universe, and Starship Troopers, working for companies such as Disney, Marvel, DC Comics, Panini, Dark Horse, and Dynamite Entertainment, as well as commercial illustrations for numerous advertising agencies including Nike, Universal, CBS, Mattel, and Habsro. When he gets the chance, Andie concept designs for various companies, and also juggles illustration duties on a range of children’s picture storybooks for Harper Collins. Malaysian born, Andie migrated to Australia at a young age, and then moved to London in 2005. In 2012, he journeyed back to Asia and currently resides in Singapore with this wife and daughter.

And when we were going over it, it sounded like the sort of thing that could be a really exciting story. And essentially, they were very excited clearly about working with us a lot and being able to help develop the story so that it could be the best possible book that we could have and to be able to work with us on the story and the art a lot.

So, I reached out to Stuart and Andie, who I had both worked with a little bit in different capacities in my previous life when I was working at DC Comics. And both of them have a lot of experience both with prose and with comics.

And this was really at heart a story that melted the core, the classic kind of thing that Stan had created in the past, but that he was excited about doing as a book, and we thought could make a really interesting book both just because the story’s was interesting but also from a kind of logistical standpoint.

You know, it’s kind of like he hadn’t done this. And he was excited about coming to this with this story as a book instead of a comic or a graphic novel or a series of books like that because he wanted to play in this pool. 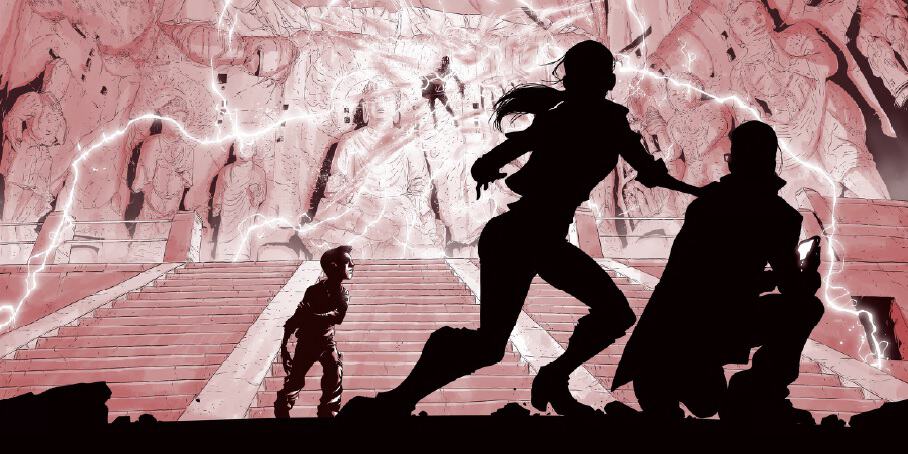 Stuart Moore said this about writing the story: I will say anytime you do a story like this, so much of the modern superhero genre is infused with the DNA of the stuff that he [Stan Lee] and his collaborators created in the 1960s. So, I’m sure I’ve written superhero stories that owe more to him even than this one does in a lot of ways because it’s just so much part of the mythology now. It’s the language we use when we tell these stories. And that’s why it was interesting to take something like this and try and flesh it out, use the broader canvas that you get in prose as opposed to comics, where you’re kind of limited to 20 or 22 pages at a time.

Andie Tong spoke about his integral role in creating the characters: I was born in the Year of the Tiger. And since Steven Lee [the hero] also has the power of the Tiger, I thought this project was meant to be. So, I decided to try my best to create the characters and foresee them the way I thought would accentuate their powers and all that.

The main character was decided and the powers that he would have, but the others, I had the leeway to choose ethnicity and sex of the characters and which powers go to which one, although the powers were already divided into villains and heroes. But essentially, I got to create the characters from the ground up and to bring forth the look and feel of each character, with the guidance of Nachie, of course, and Disney. And it was really good. It was an exciting project, definitely. And I thought, you know, this is not just superheroes. I didn’t want to completely go with them in–you know, in tights. I just wanted to bring it down to realism in the sense that they were wearing normal clothes.

(Read my full book review of The Zodiac Legacy at 5 Minutes for Books, and also see Andie’s advice to aspiring artist/illustrators)

Stan Lee presents a brand new, magical, super-powered adventure! When twelve magical superpowers are unleashed on the world, a Chinese-America teenager named Steven will be thrown into the middle of an epic global chase. He’ll have to master strange powers, outrun super-powered mercenaries, and unlock the mysterious powers of the Zodiac.

Enter to win our special giveaway

Click over to 5 Minutes for Books to win a copy of The Zodiac Legacy: Convergence plus an original character sketch by Andie Tong.