My son is not exactly a daredevil.

While he is a spirited, 100% all-boy, 4-year-old bundle of activity, he plays within self-imposed boundaries of caution. Tentative and careful, he doesn’t like to put himself in any danger.

Of course this is incredibly helpful in raising an active boy. I never have to worry about him climbing too high or jumping out of windows. (Unless, of course, you count darting away from me in parking lots – that he does!)

So when it comes to his bike helmet, he has always felt quite unprotected and complains about it. He continually pushes it back on his head so his forehead is exposed. Totally frustrated, I always try to force him to leave it in place.

Today I found out why he does it.

We went to buy him a new bike. (His first – finally. He had so many ride-on toys – a pedal car, Big Wheel and a scooter – he had no interest in buying a bike.) So, today, we finally went to make the big purchase.

After we bought the bike he told me that we needed to buy him a skateboard helmet because his other ones are too wobbly.

Concerned and frustrated about the way he wears his helmet, I agreed. It sounded like a much safer option. So off we went to the skateboard/cycle shop. (I had purchased his bike from Canadian Tire – read: cheap!)

Next problem – even the skateboard helmet, with its greater head coverage, did not pass Jackson’s safety test. Trying to pull it back like he did with his other helmet, he complained, “It still isn’t protecting the back of my head.”

“Aaaahhhh”, it suddenly all made sense!

He was trying to protect his head when he pulled back his current helmet.

The man at the bike store had an idea. “Try this one,” he suggested and pulled out a huge, full face helmet.

“No. It is a BMX helmet and you can use it for skateboarding, biking or whatever.” The man explained to us.

Jackson slipped it on his head and was immediately sold. We are talking full coverage! Not one part of his sweet head is left unprotected.

Now, I was looking at this huge thing and thinking – that doesn’t look cheap. But there was a beautiful sign taped to the pile of boxes – 50% off. I was hoping…

“So is this helmet part of that sale?” I ventured.

“Oh no. This isn’t on sale,” and he proceeded to tell me the price.

Now ladies, at this point I really had no choice. My son has two well-made bicycle helmets at home and has tried on numerous skateboard helmets. Nothing is working for him. I can tell that my son’s cautious instincts are going to settle for nothing less than this shiny black, ridiculously expensive cocoon.

So really – you can see I had no choice. (I also used this defense when explaining it later to my husband.)

I bought it. My four year old son, now proudly boasts a BMX bike helmet that was twice as expensive as his brand new bike.

It may be a bit over the top. But he feels safe. And doesn’t he look cute?!? 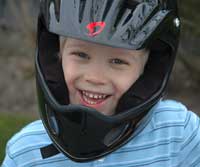 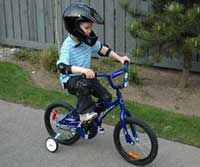