Four months ago I took the trip of a lifetime.

Four months ago, I sunk my toes into the whitest sand I’ve ever seen while looking out over crystal blue waters.

Four months ago, I left my husband and my three children behind as I set out to accomplish one of my life’s dreams.

Four months ago I came face to face with my heritage. 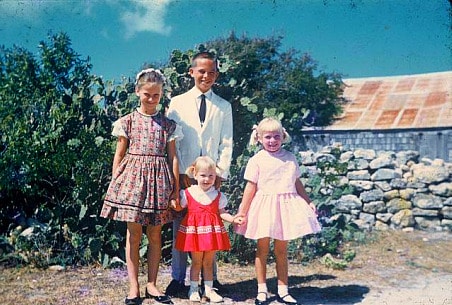 My grandparents, Jim and Betty Cooper, were pioneer missionaries to the West Indies. In 1961, after selling all of their possessions, they packed up their four small children ranging in age from 12 to 1 and headed to the Turks and Caicos islands.

Situating themselves on the island of South Caicos, my grandparents were an immediate novelty in this relatively unknown land. They were young, pretty (my grandfather strongly resembled Jimmy Stewart) and charismatic.

While the work was exciting and the backdrop beautiful, life in the islands was a challenge. They had mouths to feed, but somehow never enough food. Fresh water was difficult to come by, which led to many illnesses. At some time or another, someone was always sick, as my grandmother dutifully journaled in her trusty diary. 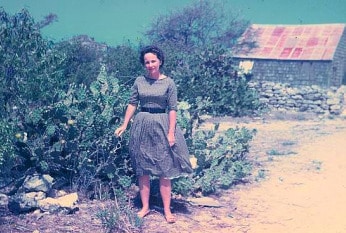 My grandmother was 31 years old when they arrived in South Caicos in October of 1961 (48 years ago this month). I am 31 years old today. When my grandmother passed away in 2004, my mom brought home all of her old journals. I’ve laid awake countless nights, pouring over the pages of these books, soaking in the thoughts of a woman who was one of my heroes. The pages smell of time and wisdom – of heartache and perseverance. They are a connection to a piece of myself.

The morning my grandmother died, I sat beside her bed and held her hand and I promised her that I was going to make sure that the heritage she left behind would be made known. When she was first diagnosed with cancer, she and I talked about writing her story once she got well.

But she never did get well.

So it was with great reverence that I stepped off the small plane onto the tarmac in South Caicos. With my mom by my side, I set out to discover the heritage that has identified the backdrop of my life.

And as I stepped into the balmy air and breathed deep the smell of salt and caught a glimpse of the blue waters and stoic palm trees I had a fleeting surge of gratitude that my grandparents weren’t pioneer missionaries to Antarctica!

My grandfather built the Calvary Baptist Church in South Caicos from the ground up. He poured his heart and soul into those people and they, in turn, loved him and his family back.

But his ministry didn’t stop in South Caicos. You see, my grandfather was nothing if not tenacious. And so, using nothing but a tiny, undependable 17 foot motor boat, he set off into the open waters, travelling among all of the Turks and Caicos islands. He started churches on Provodenciales as well as North and Middle Caicos and often spent several days on each island, walking miles through tangled brush, rocky terrain and clouds of mutant mosquitos in order to meet and disciple the people he had come to dearly love. 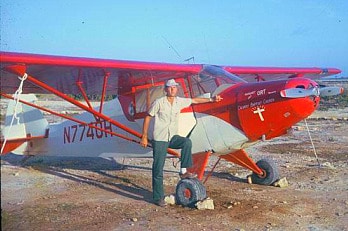 Several months into their stay, my grandfather realized that his little boat was not effective for the ministry he hoped to do, so he began praying for an airplane. When his children pointed out that he didn’t know how to fly a plane, he calmly told them that if the Lord was able to bless him with an airplane, then He’d surely give him the grace to fly it.

And indeed, not many months later, my grandfather met a man who was so taken with his mission that he gave an airplane to this young pastor. And within a few months time, my grandfather was a master pilot, landing his small prop plane on strips of sand.

As my mom and I walked down the street in Kew, North Caicos one afternoon, we stopped to talk to a group of people sitting on their front step. Showing them a picture, my mom told the group that she was Jim Cooper’s daughter.

“Oooooohh…” one older man exclaimed. “I knew your daddy. I used to fly with your daddy. He was a good man, your daddy. We loved Brother Jim Cooper.”

It struck me in that moment that although 48 years had passed, people remembered my grandfather. As one woman we met said, “There has never been another person like Jim Cooper to come to these islands. Jim Cooper brought Jesus to the Turks and Caicos islands. You won’t find another man like him.”

My grandfather died in 1973 when he was only 44 years old. I never met him. But for those eight days, as I walked in the places he walked, saw the sights he saw, breathed the same salty air that he breathed, I felt like I got to know him. For a few brief days, I connected with him. It was amazing and sweet and precious. 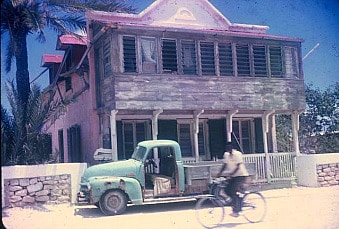 And as I watched my mom look up at the home that held her childhood memories, it’s walls ravaged by time and Mother Nature, I saw a bit of her that I’d never seen before. There was a little piece of her that broke through in the sandy street of a tiny island. 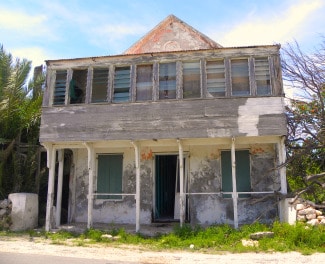 When the week was over and we boarded our plane to head home, I felt an overwhelming pride in the islands of Turks and Caicos. I felt like I could call them ‘my islands’ as my grandmother so often did when I was growing up.

I also realized that I needed to document these days for my own children. Someday, when my kids have children of their own, perhaps they will read the words I wrote and recognize the heritage that they are so blessed to carry.

We’re all going to leave this earth someday and we will leave a legacy. What will our children and grandchildren think of us? Are you leaving bits of yourself behind for them to discover?

Keep blogging, friends. Your words are the bread trail to the history you are creating for your grandchildren, your great grandchildren and generations to come.

To read more about my grandparents and about my journey, click here, here and here.

ShareTweetPinPocketMail
Wordless Wednesday — A Girl and her Cupcake
Do You Watch TV Shows Online?