On Sunday, we had movie night but i wasn’t our usual Movie Night with Mommy. No! This time around the wee ones invited ten of their closest friends to our house to watch Ice Age: Continental Drift before it came out on DVD.

We had a whole party around the pre-release viewing, and judging by the giggles and noise, everyone had a blast. 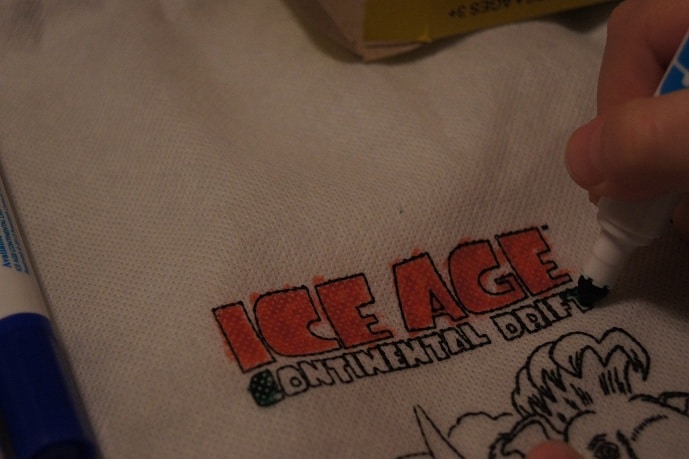 Because a party isn’t a party without gift bags, we were lucky enough to have gift bags for each of the kids to take home filled with all sorts of Ice Age goodies.  Keeping in the theme helps make any party fun, and this was no different.

When the guests first arrived, we had activity sheets set up for them to work on until all the guests were there.  And the goodie bags were their own entertainment, as they were colorable and came with markers, in addition to the cookie cutters, ice cube trays, photo ornaments, mugs, and hot cocoa. 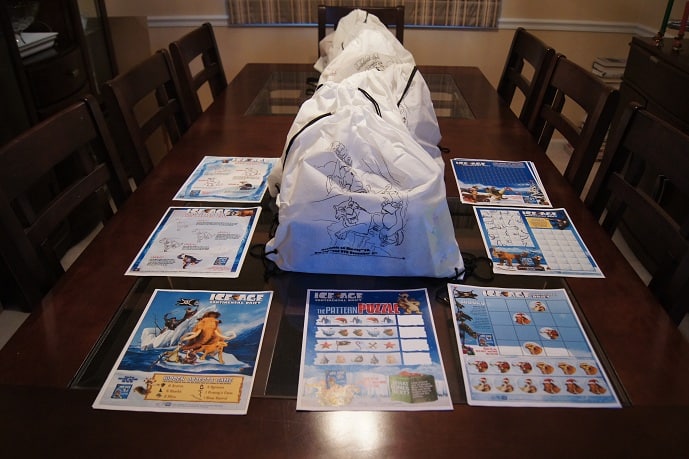 They had a blast! Between figuring out the Ice Age sudoku and playing the dot game, time flew until we were ready for the movie.  I was impressed by how well all 10 kids shared and played together… and by how well some of them colored their bags, too!  It definitely got them in the mood – especially Little Miss who didn’t know what movie we were going to see until I put it in, although this gave her a good idea of what it might be.  Good things come to those who wait! 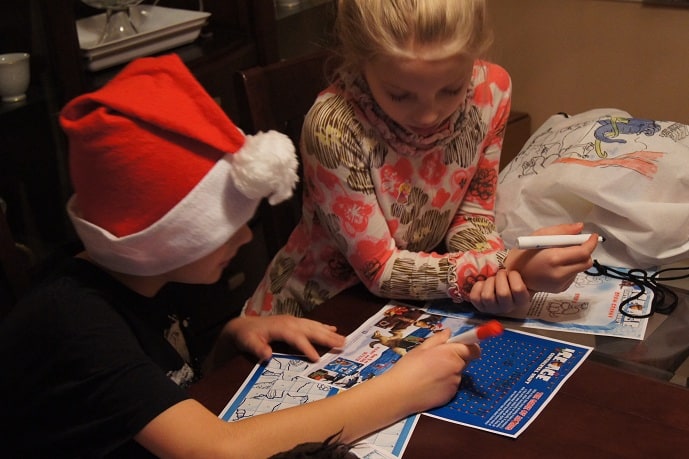 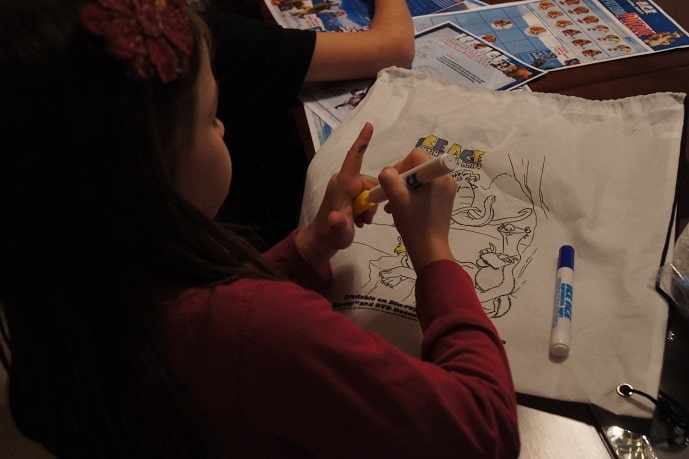 While the kids were getting their bags together and playing with the activity sheets, the adults who stuck around hung out in my kitchen  where I had the food.  Knowing that at some point kids would be hungry – and that it’s key to make sure there’s something for everyone – I got creative.

I found the perfect winter decorated cookies for an Ice Age party as the main dessert. I also put out animal crackers (get it?) for snacks and we had grapes and juice and pop, too.  Of course we had popcorn.  A lot of popcorn. I never knew how much popcorn 10 children could go through until last night! Between the Christmas plates I found and the Ice Age themed food, we were good to go. 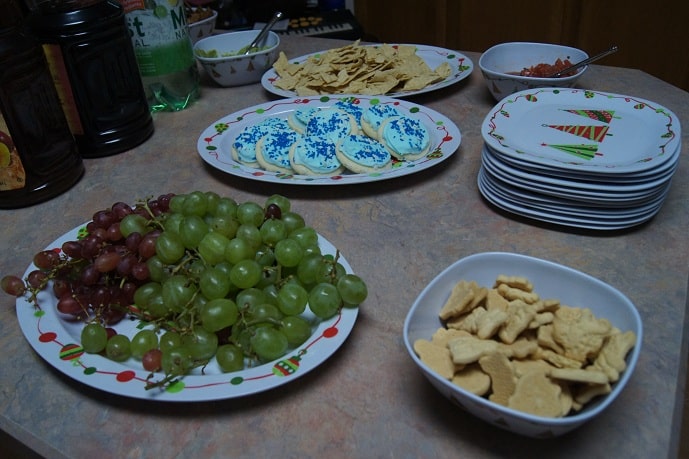 The one part I didn’t get a picture of – because it disappeared too fast – was the pizzas I made for after the movie. I made my own pizzas, and then I “cracked” them.  Instead of cutting perfect pieces, I pulled the pizzas apart, just like the continents and ice floes in the movie.  I thought it was brilliant and the kids thought they were tasty.

As for the movie itself, the merry giggles each time Scrat did something silly warmed my heart.  Everyone found a place to hang out, whether on a couch or a sleeping bag on the floor – and the show began.

You know it’s a good movie when the adults can sit in a room behind the kids and have a conversation or three because the kids are so engrossed in the movie. Our conversations were continually interrupted by the adults pointing out the “best” line of the movie.

My personal favorite?  “Ellie” is talking to Manny and tells him that, “You’re right.  You’re always right.”  Manny agrees then shakes his head. “Wait!  Ellie would never say that. You’re not Ellie!” which is how he realizes that they are sirens. 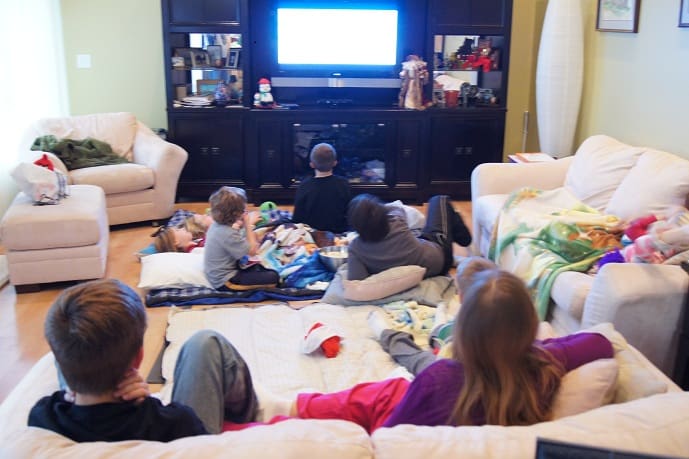 We had a conversation with the kids after the movie was over, and the big question was “WHEN does this movie come out on DVD?”  Lucky for them, the movie is released to DVD and Blu-Ray on Tuesday December 11.  And I have it on good authority from a few of the parents that they will find this DVD under the tree come Christmas morning.

When the movie ended, everyone insisted we watch all the extras on the DVD.  They loved seeing the “lost” scenes that didn’t quite make it to the DVD.  The “We Are” extended music video was another favorite.  Even the adults agree that it was a great song.  The inclusion of “The Story So Far” was perfect to remind everyone of the other movies in the Ice Age series.  Had I been thinking, we would have watched that before the movie, but I might have had a riot on my hands if we hadn’t started the movie soon!  The kids were so excited to watch it.  And they were just as excited after the movie was over. 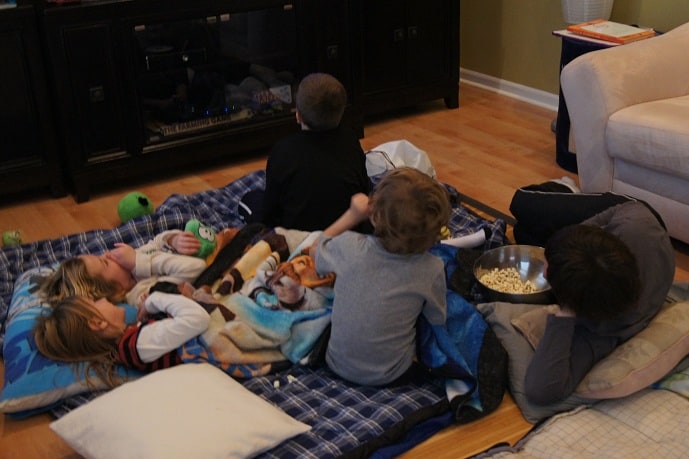 “This was the best movie ever!” per one child.

“Did you see what Scrat did?  He was like a pinball.  It was so cool!”

“I loved it when Ellie swung around on the pirate ship.  She could do it because she’s part possum.  I want to be part possum, too!”

“Can we watch it again?”

“You have the best parties ever.  This was the most fun I’ve had all year.”

And of course the inevitable, “Moooooom, can you buy me this movie, too?”

So yes, I’m pretty sure our party was a success. The fun of having the food stay with the theme of the movie (remember Granny throwing fruit off the ice floe to Precious?) made it even more special. And the activities were a lifesaver. With 10 kids, you know it’s a good half hour from the time the first one arrives until the last one gets there.

They were so excited to have something new to do that they didn’t mind waiting. I actually had to call them in to start watching the movie twice.  And then they stampeded in!

Are you ready to watch it, too?  You can host your own Ice Age party.  The DVD is available as of Tuesday December 11, so go on out and purchase a copy!

In the interest of full disclosure, I was provided with a copy of the Blu-Ray for Ice Age: Continental Drift.  I also received goodie bags to provide to the attendees of the party and a gift card to cover the cost of hosting the party.  All opinions remain my own.

Written by 5 Minutes for Mom contributor Michelle who may have had children for the sole reason that it gives her a great excuse to watch kids movies.  See what else is lighting up her life on her blog Honest & Truly! or follow along with her on Twitter where she is also @HonestAndTruly.