Considering mice are one of the most inexpensive pieces of technology I have in this house, you think I would at least have enough for our three laptops.

But no. Around this house, we steal mice from each other. Seriously. You will sit down at your laptop, instinctively reach your hand out, and your mouse will be gone.

And then we will usually holler, “Come ON! Who took my mouse?” And someone will reply, “That was my mouse!”

Up until two weeks ago we had two mice (and one of those worked only intermittenly) between three computers.

Why did we not have enough mice to go around? Well, a couple months ago, Susan gave us an extra laptop for Jackson (which I have now “borrowed” too since my laptop’s battery decided to call it quits and I have to remain plugged in at.all.times.) and the mouse she gave us didn’t work. (Another broken mouse. There are least two other broken mice in this house too, but that is another story. Why, by the way, do mice break so easily?!?)

BUT THEN, when we were trying to share two mice between three machines, little Miss Olivia decided to walk away with my mouse (the only one that actually worked 100% of the time) and now we can’t find it. Seriously CANNOT find it. We have looked everywhere. For two weeks. While Phil, Jackson and I steal from one another.

How on earth can an (almost) two year old lose/hide a mouse? I mean, it isn’t even wireless!

Finally, the other day Phil was running up to Staples to get something and I suggested he pick up a mouse or two. He came home with the cheapest one. It is pink and too small for my hubby’s hand. 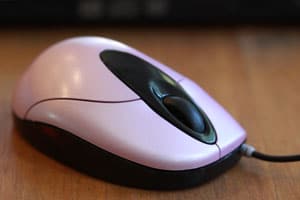 And did I mention it was pink??? Perfect to deter my seven year old son from stealing it.

Somehow I must protect this mouse from her magical mouse hiding powers! And since I think I have officially given up looking for the missing mouse and we are now back at just two mice for three laptops, I think I better get to the store and buy another mouse.

P.S. If you are wondering if I have ever tried giving Olivia one of the old broken mice to keep her paws of the working ones, I have. It doesn’t work. She is far too smart for that trick.

P.P.S. Is the plural for computer mouse, “mouses” or “mice?”

P.P.P.S. I wrote this post almost two months ago and forgot about it. I STILL haven’t bought a third mouse. My husband and son are stealing a mouse back and forth from each other. Yes, it is about time I got around to buying another mouse!

Written by Mommy Blogger Janice Croze, co-founder of 5 Minutes for Mom. Remember to sign up for our RSS Feed.

ShareTweetPinPocketMail
Mom, Nurture Yourself With beginning by Maclaren
Bloggertunity — A new ebook for Mom Bloggers