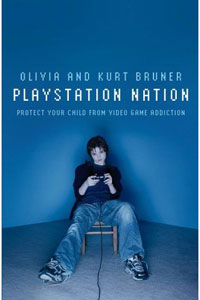 “If you have a child who plays video games (or may in the future play video games), shut the cover of this book now, march up to the check-out counter at this moment, and purchase it. Immediately. Period.” – from Playstation Nation

by Olivia and Kurt Bruner

Not too many authors start out commanding you to buy their book, but after having read the first few pages of Playstation Nation

, I understood why Olivia and Kurt Bruner so adamantly insist that parents read their story.

In fact, I am one of the parents they are writing to — one of the people they believe must read their book. I am the parent they desperately want to reach before it is too late.

My son Jackson is almost five and, of course, he wants to play video games. I have a hazy feeling that I shouldn’t let him but we haven’t made any concrete decisions. Part of me feels like it is useless to fight against it – video games are everywhere. He has already played them at friends’ houses. At home he has played educational computer games… and some not so educational ones. But I haven’t given in and bought him a system.

, I knew I didn’t want Jackson to waste any of his precious youth playing video games. However, I needed this book to show me the damage video games are doing to this generation and to give me the determination to fight the upcoming battles to keep video games in check in my son’s life.

Olive and Kurt don’t say that video games are from the devil and that we should throw them all in the garbage. Instead they walk us through a thorough look at the scientific facts of video game addiction and give us an inside look at many young people’s personal stories of addiction so we can make the best decision for our families.

Their book is the definition of eye opening. I had never realized the insidious danger that sits in so many family rooms and bedrooms across North America. Video games are a serious threat to our children’s well being, masked in the form of play. And busy parents everywhere are fooled into thinking that they are as harmless as the TV and just a part of life for children in this new millennium.

I was one of those parents. I am not anymore.

Through story after story and study and study, Playstation Nation will show you how video games are addictive and it will help you decide for yourself how your family should deal with the video game phenomena.

“In 1998 a report titled ‘Evidence for Straital Dopamine Release during a Video Game’ published in the journal Nature describes a process called positron-emission tomography (PET). A team of British researchers found that video game playing actually changes the chemistry in the brain by increasing the activity of dopamine. Dopamine is the most important neurotransmitters in the brain, controlling movement, attention, and learning.

…Researchers at Hammersmith Hospital, a clinical research hospital in London, described the infusion of dopamine as being ‘similar to that observed following intravenous injection of amphetamine or methylphenidate.’

…To put it in layman’s terms, kids who play video games submit their developing brains to a pleasurable chemical reaction similar to an amphetamine drug injection! And the more often they play, the more likely they are to become hooked on the feeling.”

But if removing game systems from your child’s life sounds a little extreme (and I must stress, that is not what the Bruners are advising all parents to do), listen to what this young man, a successful former homeschooler who is currently in law school and still struggling daily with his video addiction, had to say when asked what he thought a mother should do if she has a child who wants to play video games all the time:

“Get rid of it, completely, entirely. I wish my mom had done that. Even if you limit the actual playing time, you’re not going to eliminate the kids thinking about it as long as it’s in the house. Even though I wasn’t allowed to play for a month, it was still all I thought about.”

Are your boys in college? If you think your children are too old to worry about video game addiction, Olivia and Kurt have some concerning facts for you too!

Through their book, I learned that college dorms are becoming dungeons of addiction, with young men trading in their education – and their parents’ money – for endless hours of mind numbing video gaming. If you have a young man at college I suggest you read this book and then send it to your child when you are done.

You can help protect your children from wasting these precious years. You can help them reclaim their time and turn off the video games.

I am so grateful that I read Playstation Nation

. I strongly recommend it. I now feel empowered to make the decisions and to fight the inevitable battles in our future to keep my son from video game addiction.