I HAVE to tell you that I am so excited, so very excited about the outcome of the RESCUE event that took place on Saturday, April, 25th, for Invisible Children. You may recall that I recently told you about the event and why it was so important.

Invisible Children is an organization determined to help the thousands and thousands of abducted children in Northern Uganda and The Congo, who are taken from their homes at young ages, desensitized to violence by witnessing horrendous beatings and killings, and then forced to fight as child soldiers for a terrorist, Joseph Kony.

Invisible Children decided that it is time that Joseph Kony is captured and arrested and his child soldiers are freed. So they organized an event called The RESCUE, where thousands and thousands of people gathered in over 90 cities all over the world to abduct themselves to bring media, political and cultural attention to the longest running war in Africa and to the situation affecting the 30,000 abducted child soldiers.

We gathered at the state capitol and then walked for a couple of miles in a single file line, holding a rope, just as the abducted children are forced to do. Finally arriving at a nearby park, we set up our sleeping bags and blankets, wrote letters to our senators asking them to rescue the child soldiers in Africa, and waited for a political or cultural figure to come out and rescue us by pledging their support to do something about the situation in Northern Uganda and The Congo.

Make an on-line slideshow at www.OneTrueMedia.com

We were rescued by a representative from Senator Udall’s office at around 9:30 P.M. The majority of the cities in the U.S. were also rescued Saturday evening. But there were several cities that by Monday had not been rescued yet.

Many Invisible Children staff members and volunteers drove from all over the country, to join the group in Chicago. Deciding that they TRULY needed to do something spectacular in Chicago, to get attention, they came up with a choreographed version of the song, “In the Name of Love.” They rehearsed it several times before heading outside of OPRAH’S STUDIOS to sing it to her, asking her to rescue them.

Here is a video of all 500 of them rehearsing “In the Name of Love.” It will give you goosebumps.

As they sang in front of her offices and then studio, Oprah’s staff members came out and watched, proud of them. But there was no sign of Oprah. Soon they were told by Chicago police that it was time to leave, they were trespassing on private property.

Determined, they showed up again this morning, and what happened next, was incredible. Oprah came out, handed out cupcakes, found the 3 filmmakers of the Invisible Children film who are also the founders of the Invisible Children organization and brought them into her studio. She modified her show schedule around and today INVISIBLE CHILDREN will be on the beginning segment of OPRAH!

She will rescue Chicago and share the story of the child soldiers, today, on her show. So, if you are able to, tune in. You will NOT want to miss it. 🙂

I am so proud to have been a part of such an incredible event. I KNOW that what we did will make a difference and I can not wait to see the outcome of this event.

There is also the Lobby Day event planned in June where Invisible Children staff and volunteers will head to D.C., take part in symposiums, hand out thousands of letters written to senators during the RESCUE event and spread the message that “the time for peace is now, and this is how it ends. The program will include lobbying trainings, VIP speakers, a kick-off rally and will culminate in an unprecedented outpouring of activism on Capitol Hill, with hundreds of meetings taking place between Members of Congress and their constituents.” I WOULD LOVE TO ATTEND and hope to save up the money to do so.

Please let me know if you are able to watch the Oprah telecast today. 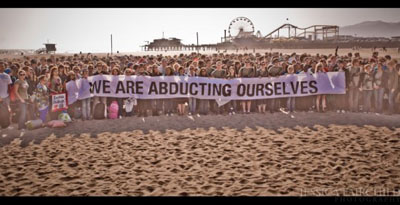 RESCUE group in L.A. (5,000 showed up and were rescued by a host of celebrities including Kristen Bell, Ben McKenzie, Kirsten Dunst and Tom Arnold) 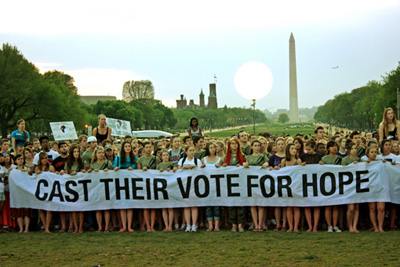 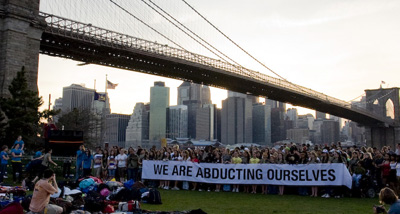