He practiced so hard.

His teacher said he needed to practice his piece 100 times. So he counted and made sure.

When his tempo was a little too slow at the rehearsal in the morning, he went home and did it five more times at the correct speed. He was ready.

In the afternoon, he put on his freshly steamed shirt and insisted he could only have a snack — that is what his teacher had said to do before the concert. And to him, that made it a law.

He was jumpy with excitement, as I scrambled to find an empty flash card for my camera and rush us out the door. We couldn’t be late. Not for this.

When we got to the restaurant – the humble location of his first “concert” – he bounced over to the other students, to sit in the chairs lined up for them. A jazz pianist, the special guest artist, performed on the small piano tucked in the corner of this small Mexican Cantina.

Our table was in the front and Jackson came over to me, his step a little gentler than before we arrived. “I thought it was going to be a grand piano,” he whispered, his face betraying his disappointment. When his teacher has said, “concert,” what does a six year old imagine?

He had played at “recitals” – but to him, this “concert” was different.

“That is okay sweetie, they just can’t fit a grand piano in here,” I assured him.

He rejoined the other kids and I readied my DSLR, instructed my mother how to use my video camera, and waited. I was so nervous for him.

He was the third student called. He walked to the piano, just as he had practiced — hands at his side, smile on his face. After he bowed, he turned to the piano and took a deep breath as he sat down.

I could feel him concentrating, his eyes fixed on the keys. Usually so easily distracted, I thrilled to see that beautiful moment of deliberation. He was completely absorbed.

He played his song beautifully. As he bowed, I hoped he knew it. I hoped he felt proud.

After everyone had finished and tables were cleared and emptying, his teacher put her hand on his shoulder. “Do you know what Jackson? After everyone had played, my friend, the jazz pianist, said to me, ‘That boy, Jackson, he had his tempo perfect.’ You know – you were the only student he singled out.”

It was a crowded, tiny restaurant, with a handful of young students performing for parents and family. But this “concert” did its magic. It turned a six year old boy into a musician. 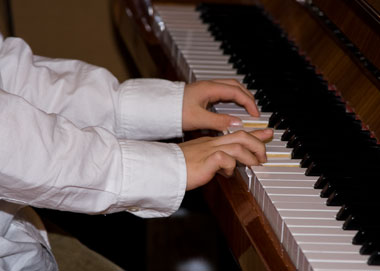 ShareTweetPinPocketMail
1 in 10 teenagers has abused cough medicine.
5 Moms are trying to change that…
$100 Visa Gift Card for one of You (and one for Under the Tree too!)