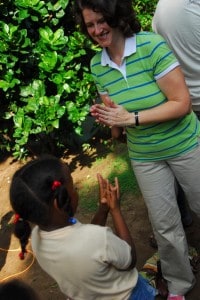 I’m an optimist by nature, so instead of dwelling on a dark ominous cloud, I often try to find the silver lining. On our last day in the Dominican Republic, I spent a couple of hours playing with kids: learning new hand-clapping games, teaching them some English, and working on my Spanish (and sweating profusely all the while).

After we left the project, we walked through the neighborhood served by project 424. In the four days we spent in the D.R., this was by far the most abject face of poverty. We walked through a neighborhood off the main roads — it was strewn with trash, with puddles and ditches filled with water and sewage contaminated from the nearby coal-processing plant.

Half-clothed children and emaciated dogs hung out in every doorway. All of this existed just a few blocks from the center with a bright mural adorning the front of the building, small but clean rooms inside, and a wonderful courtyard play space in the back where the children can play. 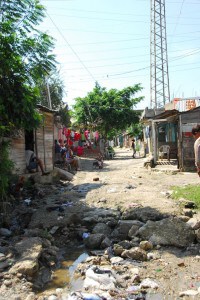 So is the glass half-full or half-empty?

As we were walking the neighborhood, Chris, one of the Compassion employees who oversees that project told us that the skin condition that caused lesions on the children’s skin as a result of bathing in the contaminated water had almost disappeared. Because of education about boiling the water and adding a little bit of bleach to sterilize it, almost every child we saw had clear skin. Brian had visited that very center just four months earlier and he said that he was amazed in the change that had taken place in so little time.

That glass is half-full.

Knowing that the children have to leave the clean and bright center each day and return to these homes is enough to squeeze the hope right out of a person. It seems an almost impossible situation to break out of.

It could be a half-empty glass, but in the center that morning I met a ten-year-old boy in a red cap who gives me hope (I think his name was Juanden). 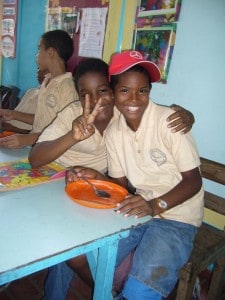 As we were observing their morning Bible class, he got up and not only read the scripture about Peter walking on water to his classmates (and in front of 5 visiting Americans). He read as well (or better) as my own ten-year-old who is a rabid reader. But not only did he read the passage, but he went on to give the meaning of the passage with far more understanding than my daughter would have.

Later I asked a translator to ask if he was going to be a preacher — to keep telling people about God like he did this morning. “Yes,” he answered. A bit later he added, “I play music at church, too. I play the guitar and I’m learning to play the piano.”

That glass is more than half-full. It’s bubbling over.

The next time a group of Americans comes to visit, I hope he and the other boys with whom I visited will remember the English that I taught them. I hope that they’ll impress them with an introduction in their heavily accented English: “My nnname isss Juanden.” I hope those visitors will be able to hear one of these children teach the word of God and another sing a song of praise, just as we heard.

This simple interaction with people who care about their future fills them with hope. It seems so little — a few hours spent playing, a few words in different languages exchanged, a smile, a hug. But they remember.

It doesn’t take much to give these children hope. Would you like to make the difference in a child’s life in the D.R.? Sponsor a child today. I think you’ll find that their hope is contagious.

Psalm 9:18: But the needy will not always be forgotten, nor the hope of the afflicted ever perish.

Visit my Compassion Trip Page to see all of my posts from my journey and go to CompassionBloggers.com to read posts from all the bloggers on this trip.