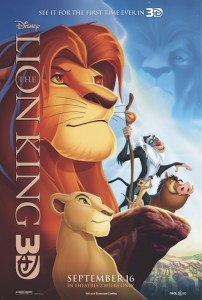 The film roared into theaters 17 years ago and immediately garnered the adjective “epic.” How could it be? A cartoon – animation – becomes an epic film that transcends generations and moves young and old to tears and laughter. A film spanning parenthood, coming of age, murder, love and redemption…all told by talking lions, birds and a particularly wise meerkat and warthog.

Beginning September 16, Disney is kicking off a two-week theatrical extravaganza bringing the magic of The Lion King to a new generation with the punched up enhancement of 3D technology providing a fresh new look.

Last weekend, Disney and Click Communications invited a group of bloggers to Los Angeles to experience The Lion King in 3D on the big screen. We walked the green astroturf and felt the magic of a great story through the wonder of 3D graphics. It was the stuff Disney dreams are made of.

Why should I see the Lion King again in 3D?

I suspect that many of you, like myself, already own The Lion King on DVD and your kids have probably already seen it. So why should you take them to the theaters to see it again in 3D? I went into last weekend with the very same question.

In the interest of full disclosure, I will tell you that the first time we saw the movie last week, I was a little disappointed. The movie was good, of course. It always is. But I thought that the graphics would have added a little to the story. I thought perhaps there would be something new to make the movie seem fresh. But it was the same movie with a little more depth. It was fun, but…

Meeting the people behind the Lion King 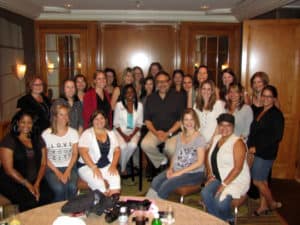 Then I met producer Don Hahn and the terminally adorable Naketa Calame, the voice of the young Nala. I saw a behind the scenes special feature (which you, too, will be able to see when the movie is released on Blu-Ray 3D and Blu-Ray High Def Combo Packs October 4) showcasing the making of the movie and the research and time and heart that went into developing the story.

I spoke with Robert Neuman who, along with a team of specialists, managed to pull the original 2D animation out of the archives and give it depth using math. Math, folks! Math makes cartoons! Did you know that math could be fun?

Those of you with ipads and laptops will also want to download the Disney Second Screen Lion King app when it releases (also October 4) as the revolutionary features are sure to enhance the viewing of the film. They will likely delight you as much as they do the smaller set in your house. Because Disney is the Master at pleasing both young and old alike. It is a gift they possess in abundance.

The power of storytelling 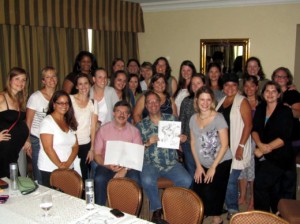 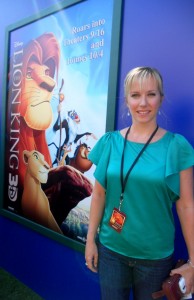 The next day I walked into the theater with a renewed vigor for the film and this time the 3D graphics came to life. The theater was full of the ones who put their love, talent, skill and heart into making a movie that spanned the emotional gamut. From Moira Kelly (Adult Nala), to Robert Guillaume (Rafiki) and all those who worked behind the scenes to create a movie unlike any other.

“‘The Lion King’ is essentially a love story between a father and son,” says producer Don Hahn. “It’s about that moment in life when you realize that your father is going to pass on to you his wisdom and knowledge. The Circle of Life. Someday we all become adults. The baton will be passed on to us and we’re going to have to grow up.”

The biggest stars of the premiere, however, were the little ones who filled the front seats. Local children from around the LA area. As I watched the movie a second time in 3D, I listened to the laughter echo off the walls, reverberating and bouncing through the air. Electrifying sounds of unabashed joy. When I saw little hands reach for the screen, trying in vain to grasp Zazu’s tail, I knew that I’d found my reason for encouraging readers to see the film.

The Lion King 3D is meant to be seen on the big screen. It is spectacular. It is a reminder of the power of film to reach past the heart and move the soul. It is laughter, pain, redemption and love. The Lion King 3D is Disney magic at its best. I can’t wait to take my kids to see it.

The Lion King 3D appears in theaters nationwide beginning September 16. Disney, along with Click Communications, flew me out to Los Angeles for the special premiere of The Lion King 3D. All of my meals and accommodations were covered. I was not compensated for this post. All opinions expressed are my own. I am grateful for the opportunity.

Kelli Stuart is a 5 Minutes for Mom contributor. She blogs at Minivans Are Hot. For more photos from her exciting weekend in LA, click here.