After more than 30 years, Disney breathes a sweet new life into that honey-loving bear we know as Winnie the Pooh by bringing the whole gang from the Hundred Acre Wood back to the big screen.

5M4M Contributor Christie O. recants tales of a tail, among other things…in Winnie the Pooh. 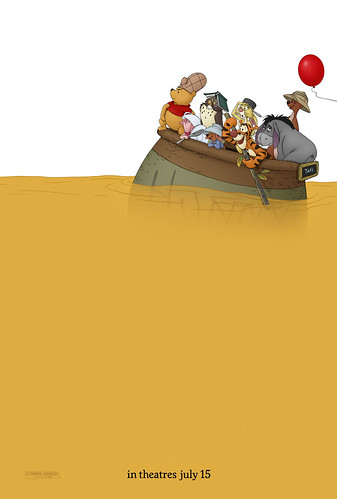 Yes, believe it or not, it has truly been more than three decades since Winnie the Pooh’s been the star of the big screen as part of A.A. Milne’s original stories – I can’t even believe it myself! Not since 1977 has Pooh been seen on film in his true classic form. That all changes July 15th when the Pooh that our parents and grandparents grew to love makes his comeback for an entirely new generation. And I must say, Pooh hasn’t aged a bit! Honey must be an amazing anti-aging agent. (I’m going to have to look into that.)

In short, Winnie the Pooh stole my heart.

Directed by Don Hall and Stephen Anderson, the newest Winnie the Pooh installation revisits the tales of the Hundred Acre Wood by A.A. Milne, by using three different story lines from the original books and combining them all into one nice big honeypot that literally overflows with the innocent sweetness of the classics.

The big-screen retelling begins in a live action set of Christopher Robin’s bedroom, reminding us that the gang of the Hundred Acre Wood are indeed characters that come alive as part of a little boy’s imagination.

The pages of A.A. Milne’s book open up and the characters begin to move around and about, literally, on the pages and on the words themselves. Well, all except for Winnie the Pooh (Jim Cummings), who is fast asleep and dreaming of honey, only to be awakened and shaken out of bed by the film’s narrator (John Cleese). Pooh wakes up very hungry with his tummy in very dire need of some honey.

Off to find some honey, Pooh and his grumbly tummy run into their friends, among them Tigger (also Jim Cummings), and Eeyore (Bud Luckey) whom, Pooh discovers, has lost his tail.

Everyone comes together to begin finding their gloomy friend a new tail with a delicious pot of honey as the prize. The whole gang is back together including Rabbit (Tom Kenny, i.e. Spongebob), Piglet (Travis Oates), Kanga (Kristen Anderson-Lopez), Roo (Wyatt Hall, Director Don Hall’s son), and Christopher Robin (Jack Boulter). 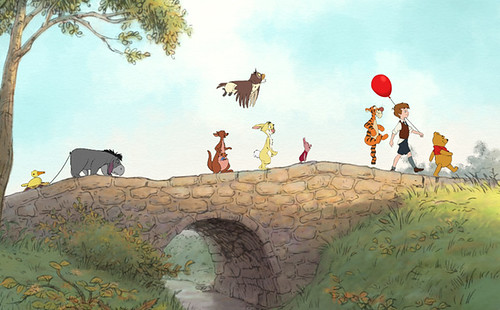 Along with the main characters, the writers somehow bring life to a smaller side-cast of characters: the narrator, who occasionally gives the slow-thinking Pooh a nudge here and there while telling the story, and the letters themselves which interact with the characters, who sometimes leap from page to page and dangle from them. 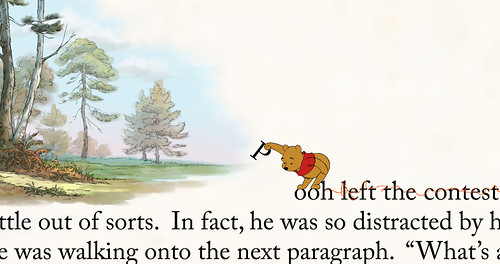 Pooh’s growling tummy, I’m convinced, is a character all on its own, too, I can’t help but giggle every time it “talks,” appearing to have a personality all of its own. Sort of like mine. 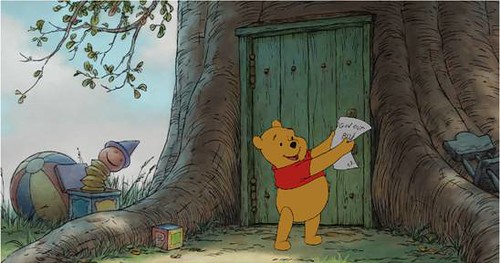 Eventually Pooh ends up at Christopher Robin’s house only to find out that his friend is not only not home, but has left behind a note that is interpreted (incorrectly) by Owl (Craig Ferguson) that he has been kidnapped by something called a “Backson,” a terrible creature known to draw in library books and poke holes in socks, among other things. The story then turns into an adventure to save Christopher Robin from the “Backson” (which does sound a lot like, “back soon,” doesn’t it? Hmmm…)

So with all of today’s modern technology, innuendo and adult themery and humor sprinkled throughout today’s rated G and PG films, does Winnie the Pooh live up to the classics?

A return to classic childhood innocence

This latest film version of A.A. Milne’s classics captures perfectly the basic child-like innocence, humor, and wonder of human nature in general. When Walt Disney set out to make movies, he set out to touch the innocence and the fun that resides in all people, not just children, and that mission is truly achieved in this movie without the fancy modern updating (the animators stick to the classic watercolors and simple sketches of the original characters), without adult language (some of the funniest parts of the movie are when Pooh tries to use big words and messes them up), and without adult themes (writers need look no further than the simplistic life in the Hundred Acre Wood and the interactions between the characters for humor).

“I am a bear of very little brain, big words and long words bother me,” – Winnie the Pooh

1. There is only one of you -and you should be proud of it.
2. Friendship before honey. Or something like that.

These are messages I can get behind, especially as a mom.

In the end, what I loved most about this movie is the honest belly-laughter I heard coming from not only my children and the children around me, but from the full-grown male adult film critic sitting behind me who watched the film on his own. Yep. It’s funny for everyone, folks. 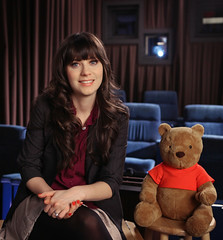 The movie comes complete with adorable soundtrack, including the classic Winnie the Pooh song by the smooth and smokey voice of the talented actress Zooey Deschanel, whose voice I have loved since Elf, (she even wrote one of the songs in this movie though she is not actually in the movie herself except for her the soundtrack), and a song about the Backson, which is on constant replay in my house.

In sum, the family will love this movie and you will fall in love with Winnie the Pooh all over again.

Be sure, also, to arrive early to see the short, the Ballad of Nessie, a cute tale of a dragon who has been run out of her home and has nowhere to go, who learns somewhere along the way that finding yourself might involve having a good cry or two. It’s adorable. 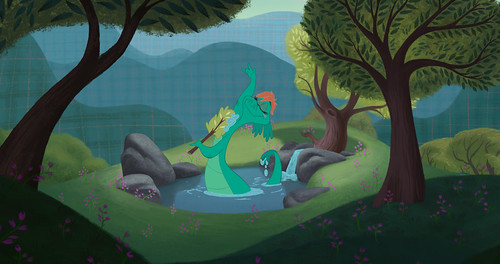 And if you can  (if the kids aren’t climbing out of their seats by the end of Winnie the Pooh) stay till the end of the credits. You might even catch a Backson…