I wish I were more Green. I hate chemicals and I hate ruining our planet, so I’m trying bit by bit to turn a little greener each day.

And thanks to our new sister site, 5 Minutes for Going Green, I’m getting a little help adding a bit more ‘green’ to each day.

Well, over at Going Green, Jenn is breaking down barriers to cloth diapering.

So I felt compelled to confess my personal failure in this fabulously growing practice.

I think cloth diapering is wonderful. The diapers are adorable. It really wasn’t as icky as I thought it would be. I agree that it costs less. And I especially love the idea of belonging to the cloth diapering crowd. 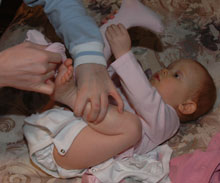 I tried. I failed. And I gave up. Never to try again.

And it bugs me because I know there were solutions and that I could have made it work, but I gave up.

Here’s my pathetic tale of failure…

When Julia (my first who is now 3.5) was 2 months old, I took a big whiff of a brand new disposable diaper. And yuck… the chemical smell overwhelmed me.

I decided I had to put my busy schedule and my laundry laziness aside and start with cloth. I researched online and then went to a nearby store because I couldn’t wait a single day to begin. In my manic mood, I ended up buying about $500 worth of Mother-Ease diapers… of course I wasn’t smart enough to just buy a few and test it out, because I was convinced I was going to succeed. Failure was not an option.

I took home my car full of diapers and proudly washed them all and embarked on my new adventure as a GREEN, cloth diapering mom. I was soooooo excited!!!

I loved how soft the diapers were, and with great anticipation I put on Julia’s very first cloth diaper. Oh. A bit disappointing… much bulkier than disposable. Julia was lost in them and looked ridiculous.

But no matter. Onward.

My enthusiasm began to wane as I now became aware of how often a 2 month old baby actually wets a diaper. It’s often. I found every hour or so I was changing her diaper only to have her instantly wet the fresh one. And then came the night. I used an extra liner, but she still woke with a wet and sore bottom.

Another day of endless changes and another wet night brought with it Julia’s first (and only) full-blown diaper rash! I had never seen a real diaper rash with sores before.

And with that rash, I quit. I hadn’t intended to quit for ever. I thought I’d just put on her disposables for a few days to get rid of the rash. But a few days turned to weeks and the cloth diapers collected dust.

Soon I admitted defeat as I never could see the bottom of my laundry hamper and I couldn’t bear to use my limited laundry effort on diapers. I gave away some of the diapers and planned to sell the rest… although I never got around to it… which if you witnessed my chaotic life you wouldn’t be surprised.

And now with Sophia, I again sin daily with disposables. 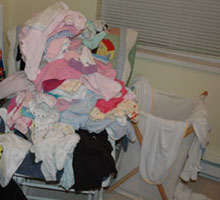 I think the biggest reason that keeps me from trying again is the laundry. I literally cannot get my regular laundry done… I never have an empty hamper.

I know that I could have solved the diaper rash situation and I know that laundry shouldn’t stop me, but in my unbelievably busy work-at-home life, I just can’t make myself do it.

So, I figure, since I’ve failed at the diaper thing… I’ll try to balance it out a bit. My new challenge to myself is to try to reduce my paper towel consumption. I’m not quitting paper towels completely — I’d have withdrawals — but I’m going to try to use hand cloths and towels as much as possible instead.

Maybe each time I pick up a cloth instead of a paper towel, I can try and let go of a little of my disposable diaper guilt.

But enough of me and my long-winded tale of woe. What about you? Do you use cloth diapers? Why or why not? Have you tried and failed, or tried and won?

Talk to you over there…

ShareTweetPinPocketMail
Back to School With Hanes
Sassy Belle Jeans Giveaway