In honor of the June 24 DVD release of Definitely, Maybe, Universal Studios Home Entertainment wants to hear your proposal stories. But before we get to the contest details, do you want to hear mine?

I remember my husband’s proposal to me, but what I remember more were the months before he officially popped the question.

Our first date was Halloween 1990. I was a junior and he was a senior at Texas A&M University. We didn’t go partying or anything like that–we saw the Tom Cruise classic film Days of Thunder at the dollar cinema. I came home and in spite of the simplicity of the date, I told the girls who lived in my residence hall, “I think that this is the guy I’m going to marry.”

Later that year, we went to his Ring Dance, the senior dance at Texas A&M which commemorates a student becoming a former student. My parents and his parents had both attended Ring Dance when they were dating. When we got the professional pictures back, Terry gave me one on which he had written, “You know what happens after the picture is taken under the ring,” foreshadowing another ring that I would one day wear. 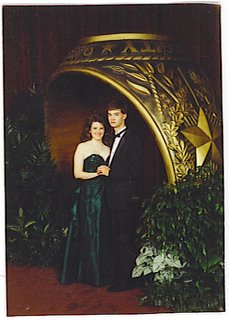 We didn’t want to get married until after we graduated, and Terry had already signed on for 3 more semesters to get his Master’s degree, which meant he would graduate a semester after I did. He was also firmly opposed to a long engagement. He definitely didn’t want to be engaged for more than a year.

Ring Dance was in May; we had been dating for six months. We didn’t get engaged until the following February. To say that I was a little bit antsy would be an understatement. What made it worse was that it seemed like each week of my senior year, another of my friends got engaged. “But Terry and I are getting married, too. He just doesn’t want to be engaged for more than a year,” I thought to myself as my left ring finger remained bare.

Distance made it worse. He was doing an internship that spring semester in Houston, so we only saw each other when I was able to go home to Houston on the weekends. We actually fought about it most weekends. “Just ask me!” I even challenged him through tears on one weekend. Now I smile at the memory, but at the time, it wasn’t funny to me at all.

One weekend in February, he came to College Station instead of me going to Houston. Friday night, I fixed him dinner and apologized for being so irritating. Saturday morning he said that he wanted to go to Research Park, a place on campus where we had enjoyed picnicking and walking and talking while we were dating. He was wearing a Texas A&M hoodie sweatshirt and I was wearing sweats and no makeup, but as we crossed a particularly memorable bridge, he pulled a ring box out from the pocket of his hoodie and popped the question.

I didn’t say “Definitely, Maybe,” but according to his remembrance, I didn’t answer at all. I think that I grabbed the ring and stuck it on my finger as tears welled up in my eyes. “Is that a yes?” he wanted to confirm.

What I didn’t know then was that he had purchased the ring in December. That horrible night when I was crying and challenging him to just ask me, already–the ring was actually waiting in a box, for the right moment. He wanted to propose on campus–where we had met and dated–because it was special. My story would be quite different if he had gone upstairs to his room and produced the ring for me in the heat of anger. I like this version better–dramatic emotional twenty-one-year old immaturity and all. 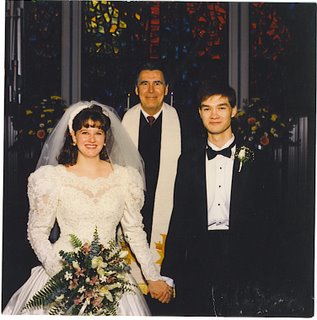 Eleven months later we got married. That was fifteen years ago, and we’re still going strong. What about you? What’s your story? Post your own engagement story on your blog with a link back to this post and the Definitely, Maybe site (http://www.definitelymaybemovie.com/), letting your readers know

that they can print a $5 off coupon and how they can enter the contest themselves.

On July 1 we’ll post the winner’s story here. I will select the story that grabs me, or if that’s too hard, I’ll use random.org to choose from the finalists.