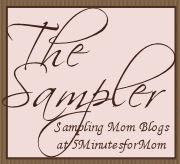 Kristin Shockley is a 20-something wife and stay-at-home-mom of three children (2 boys and a girl) ages 5 and under … with another boy due in the fall. She is a brand new blogger and she calls her blog Bits and Pieces from My Life where she shares about life, recipes, homeschooling ideas and more.

Up until a few months ago, Owen was afraid of everyone but me. When someone else held him, he would arch his back and reach for me with his arms and legs while crying hysterically. He started this separation anxiety around four months old and I expected him to gradually outgrow it by the time he was a year old. He didn’t! I was torn between frustration at never being able to put him down, embarrassment at having such a clingy baby/toddler… and a special warm feeling of being so needed. Sometimes this behavior even extended toward his daddy!

I felt as though I had done something to make him like this. Maybe I was not tough enough on him. Instead of doing something about it, I decided to wait patiently (most of the time) and at 21 months, he will now stay with my mom for a few hours or sit in a family member’s lap for a short time or wave to a stranger! These are significant strides for him, and it lets us know that while he may always be shy, he will not be trapped in his fears forever.

Owen has always been afraid to sleep alone. He used his bassinet sporadically and he never used the crib. He always slept better with Mama and Daddy. Despite the warnings that once if you sleep with your baby, they won’t leave your bed until they are ten, we practiced co-sleeping while he needed it. Now Owen sleeps all night – most nights – on a mattress beside our bed, so I know he will not be trapped in his fears forever.

Owen also has a terrible fear of crowds. We had a birthday party for our oldest son, Gavin, when Owen was not quite four months old. The party was in our house and mostly family were in attendance, but Owen cried throughout the whole party. The only thing that calmed him was taking him out of the room. We thought he was teething or sick because he was so upset. We began to realize the problem a few weeks later on Christmas Day when the same scenario replayed itself—lots of people, crying baby. Even as recently as Easter this year (when he was 19 months old), Owen was very uncomfortable and cried much of the day unless we left the room and went to a quiet and secluded one. However, we had a family party in April and Owen was much calmer. He still stuck close to me and nursed a little more often than usual, but again, I know he will not be trapped in his fears forever.

Thankfully, God is patient with us, too. Psalm 91:4-5 says, “He will cover you with his feathers, and under his wings you will find refuge; his faithfulness will be your shield and rampart. You will not fear the terror of night, nor the arrow that flies by day.” He doesn’t leave us to fend for ourselves or even push us to overcome our fears, but he protects us and shields us. Knowing He is with us, we can confidently say, “Even though I walk through the valley of the shadow of death, I will fear no evil, for you are with me!” (Psalm 23: 4) Like Owen, we often need time to put our fears aside and stand confident knowing our Guardian won’t place us in harm’s way. God is long-suffering!

I’m positive that some day my family will be able to visit all the animals at the zoo and be able to circulate the air in our stuffy kitchen, and I’ll be able to blow bubbles for the group without a toddler’s head buried in my lap, but in the mean time, I’m going to be Owen’s stronghold so he can learn the same trust that I’ve learned in my Heavenly Father.

~ Written by Kristin Shockley of Bits and Pieces from My Life.

ShareTweetPinPocketMail
Why are kids so much cuter when they’re speaking a foreign language?
Movies, Music and Ice Cream