Unless there’s a particularly compelling show on television, each time I begin my dinner preparations in the kitchen, I hear the pitter patter of little feet as four-year-old Kyle comes in to ask, “Can I help you?” He doesn’t even wait for an answer as he heads over to pull the step stool up to the kitchen island. 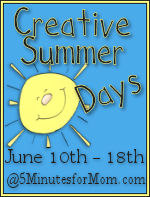 Having the kids help me in the kitchen is fun for them, and it’s a character-builder for me. I have to slow down and remain calm, and be willing to take a little more time to clean up the bigger mess that it creates. It’s absolutely worth it. In the short run it encourages them to try new food, because they see where it comes from, but in the long run maybe I will be able to kick back and watch my favorite television show while my kids are cooking my dinner.

Just last night, my nine-and-a-half year old daughter told me that she would like to cook more dinners (by herself) this summer. I told her that she could, but she had to plan ahead, and pick out some recipes so that we could shop and be prepared. Children’s cookbooks are great, because they have recipes that can be prepared with a minimum amount of adult supervision with great pictures so that she knows what it’s supposed to look like. 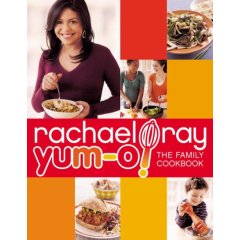 If she’s armed with a good step-by-step cookbook, the right ingredients, and a willing Mommy standing by, she does a pretty good job of putting a meal together.

Yum-O: The Family Cookbook is Rachael Ray’s newest cookbook. This book has so many positive features:

More Ways To Get Cooking with Your Kids

ShareTweetPinPocketMail
My brother is way too much fun!
Go Ahead — Ignore Your Kids