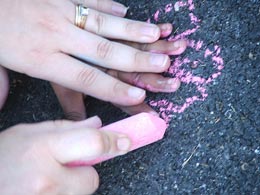 When asked what I wanted to be at the young age of thirteen, my responses were either a writer or a singer. In our senior yearbook, I was voted Most Likely to be Famous. While I do sing in church and can belt a mean karaoke tune, singing hasn’t been my route to fame. To be honest, I’m surprised that my writing has taken me down this journey because the writing I used to do can only be classified as Really Bad Poetry. One more thing that I didn’t or simply couldn’t predict at the tender ages of thirteen or eighteen was that I’d be doing a large part of my writing about being a birth mother.

No one thinks to themselves, “Hey, I’d like to give my baby to another family when I grow up.” It’s kind of like the 1980’s anti-drug commercials. No one says they’ll be a junkie and no one says that they’ll be a birth mother. In fact, if I’m honest with myself, I judged the girls in my class who were pregnant or already mothers by the time we graduated high school. And yet, four years after high school, I found myself pregnant and faced with some large decisions. And to help deal with it all, I took to journaling.

As many other bloggers know, journaling on paper is just a half-step away from blogging online. I eventually started a blog about our adoption story and journey. I entitled it The Chronicles of Munchkin Land because I had nicknamed my daughter as Munchkin from the time I gazed upon the two pink lines on the home pregnancy test. Over the past two and a half years, the blog has featured bits and pieces of my ever-evolving journey through post-placement grief and loss, opinions on the current state of the adoption system which is in desperate need of reform and how I manage to maneuver the choppy waters of open adoption. I have given advice and I have received advice. I have written as much for myself as I have written for the public that wants to judge mothers who relinquish their children as cold-hearted, drug-dealing, alcohol-slugging floozies. I fit none of these stereotypes nor do the other amazing first mothers who have also hit the blogging world by storm in the past three years.

I never thought blogging about any subject would take me anywhere other than to various places to meet other amazing bloggers. Things started to change last fall when I was invited to speak at the University of Pittsburgh at a symposium on adoption issues. I talked about, you guessed it, blogging birth mothers and what they’re bringing to the virtual table. I thought that was as good as it gets, that I had reached the pinnacle of what an adoption blogger could do (knowing full well that other adoption bloggers have done bigger and better things). After all, I’m a busy mom of two boys. What more did I have time for other than the tri-weekly blog posts and one speaking engagement?

Turns out I had time for something else. Early this year I was contacted by an editor at Redbook magazine. She wanted me to share my story for an article they were planning for their May issue. You know, May? As in Mother’s Day? The article was going to hit upon those issues in our mothering lives that aren’t happy-go-lucky. And they wanted me, or, rather, they wanted my story. Shocked but happy to oblige, I slaved over a piece for about two weeks. Word limits are not my forte as I’m known to be quite wordy. Over a few months, I did some minor edits and then I heard it had been sent to the printers. Was an old dream of mine coming true?

The day came when I received the advance copies of the magazine. I tore open the packaging and flipped to the page marked by the editor with a sticky note. Would you believe that I cried when reading my own piece? I even cried when I saw my name at the end of my personal essay. There it was, in black and white: my name, in print, in a big name magazine.

I’ve received nothing but kind words on my piece. I expected some backlash and am still on guard for a negative e-mail, comment or response to laying it all on the line. Even if they do eventually come, seeing as how the magazine is now on stands and the article can be found on Redbook’s website, I think I’ll be able to handle whatever someone wants to dish out. This isn’t how I imagine my fifteen minutes of fame. I couldn’t have imagined how much I would have to lose in order to write something of real substance. I never would have guessed how much pain I would have to experience before my words held real meaning, real power. In the end, I hope my words, as I continue to write, will continue to honor my daughter, her family and, ultimately, myself. I’ve been through a lot and my journey isn’t over. With that knowledge, I’ll just keep chronicling my journey wherever it takes me.

– Jenna Hatfield writes about her adoption story at The Chronicles of Munchkin Land. She also writes about broader adoption issues on the Birth Parent Blog at AdoptionBlogs.com. She is a wife to a fire fighter, a mom to two amazing boys and a first mother to a super great little girl. She works from home as a writer.