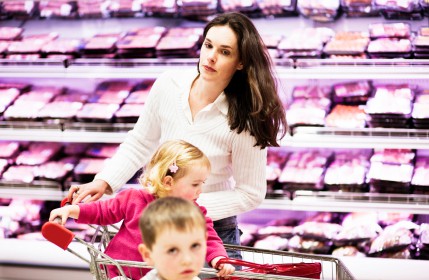 Okay, so they didn’t actually come out, but oh, how I wanted them to.

This is Erica here by the way. I just got back from an ever so eventful trip to Wal-Mart, thanks to my two-year-old, Christian, who is a pro at throwing tantrums at grocery stores.

Sometimes I am able to diffuse his fits. Other times he is just too tired and none of my attempts will quiet his cries or stop him from screaming.  It’s frustrating. I do know that it bothers people around me and I really do try to calm him down. At the same time, I have two other children with me to keep tabs on, groceries to put into my cart, and tons of people to maneuver around.

I am used to getting judging looks from others. I usually just shrug them off. But this afternoon, I had an older man glare right at me, while my son was crying, and say to me, “Unbelievable. You are unbelievable.”

I replied rather loudly, “Excuse Me?!?” He ignored me and walked on. It took me a minute to get over the initial hurt and shock and then I turned my cart around and raced after him, with my older two kids trying their best to keep up with me.

I went right up to the man and again said, “Excuse me?!? What did you say to me?”

He didn’t even turn his head, he looked straight ahead and quickly said, “I didn’t say anything.”

So many thoughts raced through my head. I wanted to say something, anything that would make him realize that it is not okay to judge people and that we moms are doing the best that we can. I wanted him to realize that sometimes our kids have tantrums, sometimes they are tired, sometimes we moms are just doing all that we can to get our groceries and get out of the store without losing our minds.

I wanted him to also realize that he doesn’t know my story. He doesn’t know who I am, or anything about my kids. There could be a whole slew of reasons for my son’s behavior. I think that is what upset me the most. He had found it completely acceptable to instantly judge me and my children.

I didn’t say any of those things, I just turned around and walked away, silently fuming.

Have you ever had something similar happen? What did you do? If you had been in my situation, would you have said something to the man?