Some things are better left to a professional…

Cutting boys’ hair has always been a mystery to me. I have watched the hairdresser’s fingers fly around, grabbing hair, snipping, picking up more and snipping again, until finally all the hair is evenly trimmed. How it all works out in the end mystifies me.

Girls’ hair seems to be a simpler project – cut in a straight line. My mom always cut our hair growing up. But she was doing a basic straight hair, straight line approach.

So since Jackson’s hair first needed to be cut, I have let the professionals handle the job. I would have been lost trying to figure out how to do it myself.

But after six years of having a son, I have discovered that boys’ hair needs to be cut very often AND the cost of all those haircuts adds up.

After his last hair cut, I was fed up. I was so unimpressed with what she had done that I figured even I could have done a better job! Besides, I have been watching her do it for years. I think I might have figured it out: Grab hair between fingers. Snip. Grab more hair. Snip again. How hard could it be?

So, I bought some scissors and I decided to tackle cutting Jackson’s hair.

To start off, I could have prepared a bit better. But I am a fly-by-the-seat-of-my-pants kind of girl. I wanted Jackson to have a haircut before the Ultimate Blog Party. So, the night before our party, while babysitting Julia, I decided it was now or never.

I told Jackson I was going to cut his hair. He was thrilled – he thought it was a fantastic idea. (I appreciated his support – even though it was terribly naive.)

I didn’t even get the poor boy a stool to sit on. I had Julia in the bath, Olivia in her bouncy seat and so, standing in the middle of the bathroom, I started snipping.

Jackson’s original enthusiasm, (“This is the best haircut ever!”) started to fade as the haircut slowly went on. Eventually, Julia whined to get out of the tub and Olivia started to howl.

I hollered for Phil to come rescue the girls and I tried to pick up the pace. When I got to trimming near his ears and neck, Jackson started to scream, “You are going to cut off my head – I don’t want to die!”

I still had more than half of his head to go – I would have called off the mission and headed to the nearest hairdresser if it wasn’t seven o’clock on a Saturday night.

This was definitely a tackle that couldn’t be left unfinished! So I just kept going…

Finally I was able to answer Jackson’s wails of, “Are you finished now?!?” with a, “YES! I am actually done!”

In the end, Jackson was pleased with his haircut. (Thank Goodness!) And even I was impressed with what I accomplished.

But if you look closely at his hair – it is the most uneven, shaggy, jagged haircut you have ever seen. (I decided to go with a disheveled look – LOL!)

Next time, I will head back to the hairdresser. 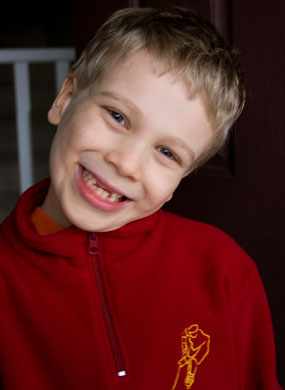 ShareTweetPinPocketMail
5 Minutes for Books — Talk of the Town
You’re Invited to a Baby Shower!