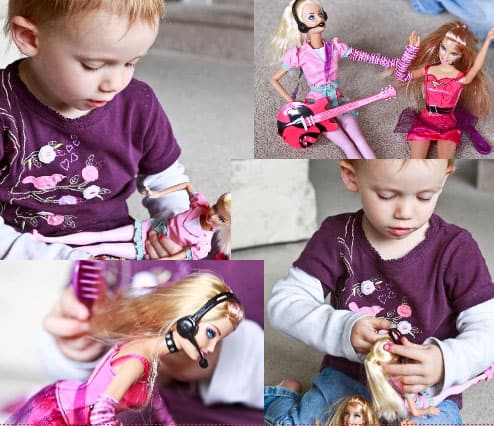 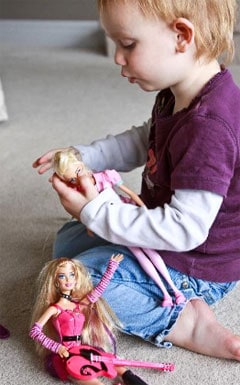 The other day, when a package arrived with some review samples of the new Barbie® I Can Be…™ line, Olivia squealed with delight and then plunked down on the floor and started to play.

Olivia combed their hair. (Actually even I combed Barbie’s hair — there is something relaxing about combing Barbie’s hair…)

She made them “talk” and interact. The Veterinarian Barbie tended to the little dog that accompanied the Barbie, giving the puppy shots and a check up. The Rock Star Barbie played her guitar and used her microphone headset.

And then Olivia reinvented them. Who says a vet can’t ALSO be a rock star, right? Toddler fingers tugged at the tiny clothes, changing up the Barbie’s looks. (Because changing her clothes is as important as combing Barbie’s hair!)

Barbie as a Role Model?

I hadn’t really thought much about the role Barbie plays in a girl’s interpretation of what careers a woman can pursue. To be honest, as an adult I was always a bit ticked about her unrealistic body shape. 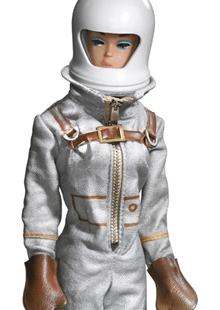 But when I read about all the different careers and roles Barbie has played over the years — Barbie has had 125 careers! — I was pleased to see that Barbie has been fighting the woman’s liberation movement in her own fashionable way!

“For more than 50 years Barbie has served as a reflection of fashion, culture and aspiration to girls of all ages. Barbie inspires girls to try on different careers, encouraging them to play out their dreams and explore the world and all of its possibilities,” said Stephanie Cota, Senior Vice President, Barbie Marketing. “We believe role-playing with Barbie leads to real life opportunities and are very proud to partner with organizations who continue to inspire girls and women with the belief and confidence that they can do anything.”

Yes, Barbie has been getting girls to dream brand new dreams…

To celebrating her 125th career this year, Barbie kicked off 2010 with a global campaign to further inspire girls by partnering with The White House Project, Take Our Daughters and Sons to Work Foundation and her list of the “10 Women to Watch in 2010.”

As a part of the initiative, the women from the list were paired with a girl – selected via contest write-in’s on Barbie.com – to be mentored in the environment of the mentee. Rachel Roy, fashion designer, mentored a girl at a show room and showed her how she makes clothes, while Olympic snowboarder Gretchen Bleiler took a girl on the slopes for one-on-one lessons.

Here is a video clip of Rachel Roy’s mentoring session: 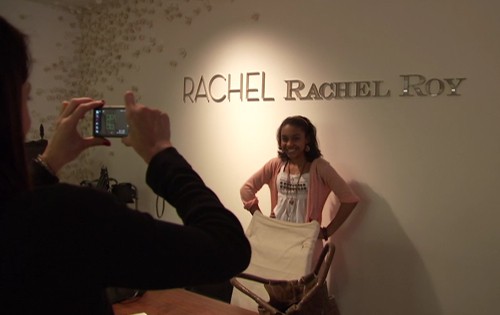 We have 3 sets of two I Can Be™ Barbie dolls to giveaway. Just leave a comment below to enter. Feel free to share with us your favorite Barbie® memory. This giveaway will close on Friday, July 30th. We will announce our winners on Saturday, July 31st. This giveaway is open to both US & Canadian residents and is void where prohibited. Please see our site’s terms and conditions of use for more information.