I don’t have any “before pictures” for you for this tackle. We are going so crazy tackling all the corners of chaos in this house, that it is hard to remember to stop and take any pictures. We just move from one project to the next. And sometimes jump back and forth between projects – which was the case with this two part tackle.

So this weekend, in the middle of all another tackle, my mom decided that our foam play mats in the family room just had to go. She insisted that they were too dirt stained and that we needed new ones. While I agreed the years had taken there toll and even scrubbing and power washing couldn’t seem to restore them to their former glory, I didn’t want to shell out money for new ones. (This total house tackle is costing us a small fortune we do not have!)

But there is no arguing with my mom. That woman always wins. So off she went and bought new ones. It wasn’t until she got the new ones home that it dawned on us that we are complete idiots and we could just turn our old mats over and – ta da – new mats! (Yes, I know it seems obvious, but I had always used the smooth foam side of the play mats – not the side that had little ridges on it – and so for some dumb reason it never occurred to me to turn ours over. But when we got the new mats, we realized that both sides of the new ones were made with the little ridges. Only then did it occur to us that we should just turn our old mats over. Yes – I know we are not that smart! So now we have to return the new mats mom bought.) 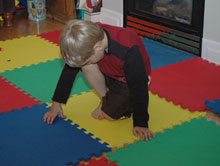 So, after pulling up the mats and washing the floor, we put down our “new mats.” (My goodness do they look so much better! Sorry I don’t have a before picture.) Jackson worked hard to get them all in place and once the new floor was down and everything was moved back, the room looked remarkably better.

Jackson then went downstairs to play with his dad. Meanwhile I had begun tackling the disaster of DVD’s, videos and dust bunnies above the TV. I sorted, dusted and cleared out a bunch of DVD’s and videos that Jackson no longer uses and I was pleased… except for the dusty, sagging dried flower arrangement that had not faired well with age. It needed to go. My mom more than agreed so she grabbed some dried hydrangea and leaves that she had and got to work. (Sorry I didn’t take a before picture of the old arrangement.) Here is a shot of the work in progress: 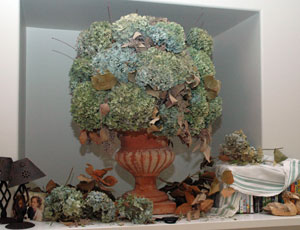 But in the middle of her project – which was spewing dried leaves, flowers and dust all over our clean room and floor – Jackson came in the room. 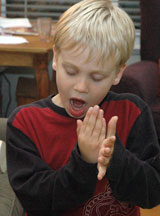 Stunned, Jackson stopped and hollered, “TIME OUT!” Susan, Mom and I turned in shock as he continued, “Let’s get this straightened out… FIRST… these are dead!” and he pointed at his Grandma’s work of art.

We all just cracked up laughing. I literally was crying I was laughing so hard. I have heard many a grown man complain about dried flower arrangements, but to hear it from the honest perspective of a child was too much.

Yes, Jackson – they are dead. But they are still going in our family room.

Eventually mom finished the arrangement and we got the mess cleaned up. The arrangement got a bit bigger than mom intended, but with a tackle list as long as ours, this arrangement will have to do. We have no time to redo it. Plus – if we make a mess again on Jackson’s new floor, we will have to deal with him!

ShareTweetPinPocketMail
Send Your Preschooler To Siberia
About Blogging — Be a Blogger, not a Writer.